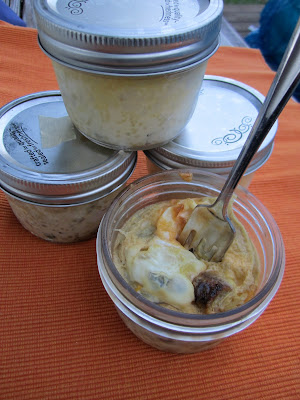 A couple of months ago, Nicole linked to this awesome breakfast idea from Food in Jars. Hubby and I have been trying to start more of our days with protein rather than carb-laden breakfast cereals. But it's often challenging to spend time cooking anything more involved than pouring a bowl of cereal when we're trying to get ourselves and the little ones ready and out of the house by 6:30 a.m.

So I loved the idea of making a little jar of eggs in advance, and plus they're just so cute, aren't they?

At first, I was bothered by the lack of the specifics in the recipe (no specific amounts, no particular vegetables), but since then, I've experimented. I've used various meats (ham, sausage links, turkey sausage), veggies (onion, peppers, zucchini, squash, mushrooms, spinach), cheeses (cheddar, pepperjack, gruyere), all with success. I'm including specific ingredients and amounts below, just so you can get an idea. You can make these in little jars or ramekins, and I've tried both. I really love the wide-mouthed half-pint mason jars; they are a perfect serving size, after cooking you can just slap the lid on and stick them in the fridge, and the wide mouths make them easy to clean.

1. Spray a large skillet with cooking spray and cook the sausage on medium-high links until done (about 5 or 6 minutes). Remove the sausages.
2. In the same skillet, heat the olive oil. Cook the onion, pepper, squash (any of the harder veggies) for about 5 minutes, or until slightly softened and beginning to brown.
3. Add mushrooms and spinach (any veggies that don't need to cook as long) and cook for another couple minutes.
4. Slice the sausage and add to the veggie mix.
5. Divide the mixture evenly among the jars (I used about 1/3 cup veggies and meat per jar; the jars will be quite full).
6. Pour the eggs over the veggies.
7. Sprinkle about 1 tbsp of cheese over each cup and stir gently.
8. Cook in a 350º oven for 25 - 30 minutes, or until eggs have set.
9. Cool, cover, and place in fridge.

In the morning, just microwave the uncovered jar for about 45 seconds and enjoy a healthy breakfast!
Posted by Abby at 9:28 AM