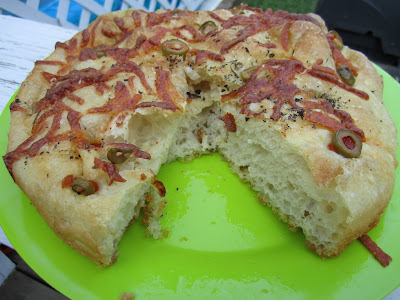 My second bread for August for the Mellow Bakers is actually two new recipes in one: our official recipe is focaccia, but it is made with the ciabatta with stiff biga from earlier in the book. When ciabatta came up last December, I chose the one made with a poolish (which we loved), so this one was new to me.

Last night, I whipped up the biga (bread flour, water, and yeast) and let it rise overnight. This morning, I measured out the rest of the ingredients (more bread flour, water, salt, instant yeast)...and my scale errored right in the middle of weighing the water. Gr! I really need a scale that measures above three pounds, but it's so hard to justify getting something new when you have something that works perfectly well, you know?

But I digress. So I added a few more splashes of water and I think I added a bit too much as this was a very wet dough, maybe the wettest I've ever worked with, but I just did a few extra stretch-and-folds and they worked their magic: after two hours of bulk fermentation, I had a workable (although still really sticky) dough. Then I needed to go to book club, so I stuffed it in the fridge while I was out.

When I got home, I put about 400 g of dough into two 9" cake pans coated with oil. I stretched them into circles, put them on the counter to rise, and ran off to the Children's Museum. Even though I hadn't allowed them their proper rest after preshaping and they didn't fit the pans when I left, by the time I'd gotten home, they filled the pans beautifully.

JH doesn't give a lot of specific instructions about topping the foaccia, so I ended up using an herb-infused olive oil (which we loved on the BBA focaccia). I poured some olive oil in a small skillet, dumped in some Italian seasonings, kosher salt, and pepper, and warmed them. Then I added some sliced onions and one sliced mushroom. We are not usually very good at being minimalist with our toppings, so I worked extra hard at it today. I used the infused oil on both focaccias and then sliced onion, mushroom, a tiny bit of pepperoni, and a tiny bit of cheese (mozzarella and parmesan) on one; green olives, pepperoni, and cheese on the other. They baked for 20 minutes. (Note: The focaccia was very challenging to remove from the pan, even with all of the olive oil. Next time, I'll line the pans with parchment as well.)

As for the taste? Isn't a picture worth a thousand words? 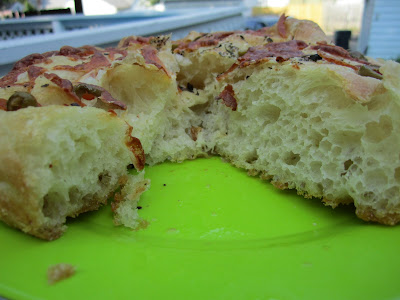 Oh yeah, it was as good as it looked. We served the bread with a lovely salad (CSA greens, avocado, hard boiled egg, and pancetta with this buttermilk dressing) and a fruit salad (perfectly ripe nectarines and blueberries). Isn't it nice when a simple little supper puts a smile on everyone's face?
Posted by Abby at 7:45 PM