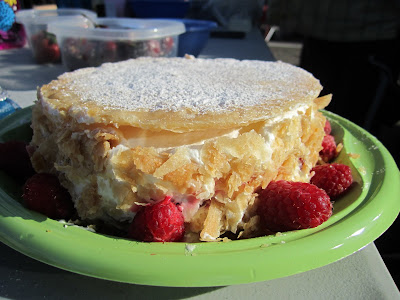 Several months ago, one of our Bake! recipes called for puff pastry. Rather than purchasing some, I tackled my fears and made the recipe in Bake! I found this video invaluable; Nick Malgieri makes the puff pastry process look effortless.

And now, here we are in the puff pastry section of The Modern Baker Challenge. I began by following the recipe in The Modern Baker. As in his other recipe, NM focuses on a faster and easier method for making puff pastry, eliminating the 5,000,000 folds and turns and rests in traditional puff pastry. This recipe is slightly different from the one in Bake! You start by combining flour and salt in a food processor. Then you add chunks of butter and pulse just a very few times. Finally you add a bit of water, pulse a few more times, and dump it all out onto your counter. For some reason, I had a more difficult time getting this dough to come together; I think the one in Bake! was slightly easier for me, but this one did finally work.

I rolled and turned the dough, and then folded it. I cut it into four pieces (about 325 g each), stuck three into the freezer, and turned the smallest one into elephant ears...yum!

A few days ago, I moved two batches of dough into the fridge to defrost. And now a new challenge: baked puff pastry layer. When defrosted, I pulled the dough out of the fridge and began to press on the dough until it was soft enough to roll, turning 90 degrees after each press or roll. When I had each piece into a 12 x 15" square, I placed them on jelly roll pans lined with parchment paper and stuck them in the fridge.

When it was time to bake, I removed a pan from the fridge, pierced the dough with a fork, and covered it with another piece of parchment paper and another jelly roll pan. My layers were perfectly done in 25 minutes (15 minutes on the first side, 10 minutes on the second). Check out Phyl's detailed post on how to bake the puff pastry layers. 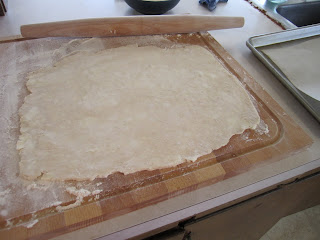 And now it's time for my official post for the puff pastry section: raspberry mille-feuille. Raspberries are one of my favorite fruits, but because hubby doesn't like them, I rarely bake the raspberry recipes. However, it's my dad's birthday, and he loves raspberries, so I thought this seemed like the perfect birthday dessert for him! 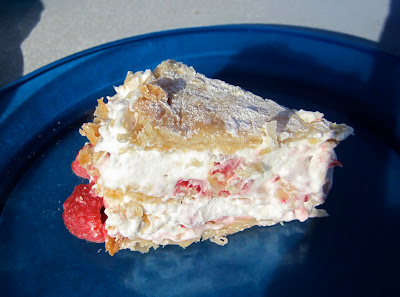 Knowing that hubby and the little girl don't like raspberries, I decided to make a half recipe of the raspberry mille-feuille and a half recipe of the molded chocolate-filled Napoleons (post tomorrow). So I took one of the baked puff pastry layers and, using a parchment paper template of my 6" cake pan, cut out two circles and two semi-circles.

I made a half recipe of the pastry cream, using milk, sugar, cornstarch, egg yolks, unsalted butter, and vanilla. It rested in the fridge overnight.

I whipped heavy cream with sugar and kirsch, and then combined a bit of it with the pastry cream. Even after the overnight rest and the addition of the whipped cream, my pastry cream was really liquidy. I'm sure I did something wrong; the pastry cream for the Parisian fruit tart worked perfectly last year.

This was a huge hit, with the birthday boy, my little guy, and even my raspberry-hating husband!
Posted by Abby at 2:51 PM