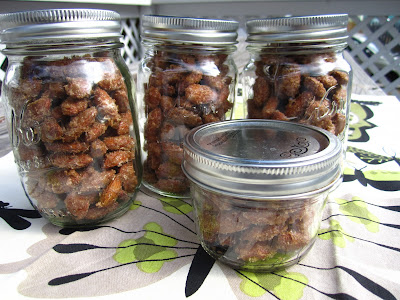 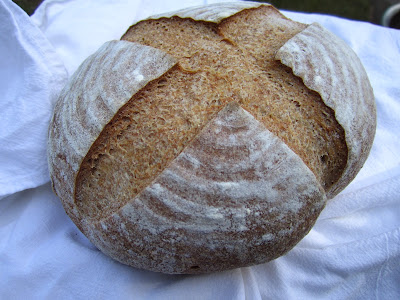 My third Mellow Bakers' bread for this month is whole wheat and whole rye, a not super-accurate name for a loaf that's actually made with a rye levain, whole wheat flour, and high gluten flour. Other than that, just a bit of salt, a tiny pinch of yeast, and some water.

I let this one rise for almost double the final rise time because I'd forgotten to preheat the oven beforehand, and I think that actually helped me a ton. It was very well-risen, had great oven spring, and I'm happier with my scoring than I've been in a long time.

The bread is very pleasant tasting with a hint of rye and a hint of sourdough, but no real strong flavors. 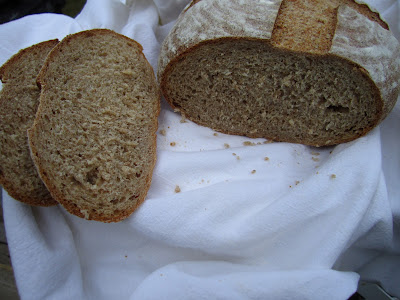 Phew, September is already half over, and I've yet to change my Twitter avatar! This month's chef was chosen by Marthe, and she picked Nigella Lawson, another chef I've heard a lot about but have never tried.

Looking for a dinner recipe that would please the family and use up some of these CSA veggies that continue to overwhelm my kitchen, I stumbled across this recipe for Thai yellow pumpkin and seafood curry. It's not the most Twitter-avatar-friendly picture, but hey, you can't win 'em all, right? =)

I ended up making a ton of changes...not my original intention at all, but just because I was rushing to cook this after a busy day at the Renaissance Festival and texting hubby who I'd sent on an emergency trip the grocery store. In other words, a typical evening at my house! =) I used a different kind of chili paste because it was in the fridge, and had to sub in veggie stock because I didn't have any fish stock. My pumpkin ended up getting a little overcooked because hubby unknowingly chose shrimp that had to be deshelled, which took longer than anticipated. And I tossed in a bunch of extra veggies because we needed to use them up and I thought the extra color would be nice. Finally, I realized as I was going to serve the meal that, in the craziness of dinner prep, I'd forgotten to make rice, so I hurriedly soaked some Thai rice noodles and we had it over that instead. The rice noodles were fine, but I would definitely make rice next time.

It didn't matter. This recipe is amazing and flexible; the base is so good, and we spent much of dinner chatting about different variations we could try. I'd especially like to try mixing up the meats: making a chicken version, or a mixed meats one with chicken, sausage, and shrimp. And next time, I'll be sure to top it with cilantro which I forgot to put on the shopping list, and maybe even something crunchy on top like some slivered almonds? Whatever changes you make, this recipe is a must-try! 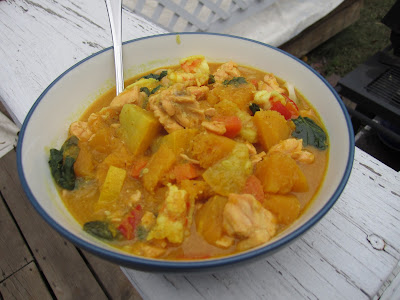 1 can Thai coconut milk
1 tbsp red Thai curry paste (NL suggests 1-2 tbsp. I was worried about the heat, so only used 1. It wasn't hot at all, and I'd probably up it to the full 2 tbsp next time.)
1 1/2 cups vegetable stock (NL calls for fish stock)
3 tbsp fish sauce
2 tbsp sugar
zest from one lemon (NL calls for 3 lemongrass stalks, but we didn't have them.)
1/2 teaspoon turmeric
3 pounds pumpkin, peeled and cut into large bite-sized chunks
2 cups mixed vegetables (chopped red pepper, sliced carrots, and chunks of summer squash)
1 pound salmon, skinned and cut into large bite-sized chunks
1 pound raw shrimp, peeled (and cut in half if large)
1/2 cup swiss chard and spinach, destemmed and chopped
1 lime, juiced
(NL calls for cilantro for garnish, which we sadly didn't have.)
(Rice. I forgot it, so I'm adding it to the recipe so I remember next time!)


1. Skim the thick top off the can of coconut milk. Put it into a large dutch oven with the curry paste, and cook it over medium until it sizzles. Then whisk the two together.
2. Add the remainder of the coconut milk, stock, fish sauce, sugar, lemon zest, and tumeric. Bring to a boil.
3. Add the pumpkin, and cook on a "fast simmer" (as NL says) until the pumpkin is getting close to tender, about 10 minutes.
4. Add any hard veggies (carrots, peppers) and cook for another few minutes.
5. Keeping the stock at a fast simmer, add the shrimp and salmon, and cook until they're cooked through, about 4 or 5 minutes.
6. Add the greens and push them down. Once wilted, stir in the lime juice.
7. Off heat, add the cilantro. Serve over rice.
Posted by Abby at 8:06 PM 4 comments: 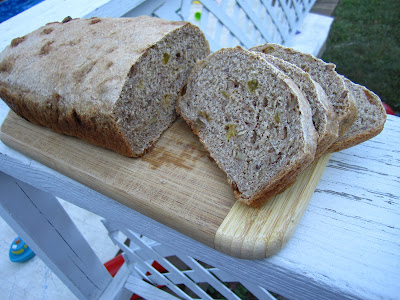 Boy, it's been a long time!

School started up again last week, so it's back to my normal schedule of rushing: rushing to get the kids up and dressed and breakfasted and delivered to Grandpa Daycare, rushing to school and mentally switching from Mom Mode to Teacher Mode, getting ready for the day, greeting and teaching 160 10th grade students, coaching debaters, and then rushing back home, switching back into Mom Mode, slapping together some dinner, getting the kids bathed and in bed, and slipping one last time into Teacher Mode to try to figure out a lesson for the next day. It's not left me with a lot of time to bake or keep up with my cooking/baking challenges.

However, this weekend, I was able to squeeze a Mellow Bakers bread in. It's a straight dough, thankfully, which meant I didn't have to do anything ahead of time and could just bake. (That's been a problem; on several occasions, I've had both the time and inclination to bake a loaf of bread, but haven't fed my starter or made a preferment or.....) My second September bread (thankfully I baked the first in August, knowing how busy September would be) was whole wheat bread with golden raisins and pecans (and a tiny bit of regular raisins and a tiny bit of walnuts, because apparently I hadn't checked to make sure I had enough of either ingredient).

This bread was quick and easy; the dough behaved exactly as promised. I made a half recipe, which yielded two pounds of dough, which I stuck in a loaf pan.

JH says to bake it with normal steam, and I'm never quite sure how to adapt that for a loaf pan. I spritzed it with water and covered it with an roasting pan for 15 minutes, but it was still a really pale loaf. I've had that happen with other JH loaves when I've baked them in a loaf pan. Any ideas out there??

We enjoyed the bread with butter tonight, an accompaniment to winter vegetable soup (appropriate fare for our last 90º day of the season, huh?). Hubby really, really liked it, which is saying something, since normally we aren't big fans of fruit and nuts in our bread.

Hopefully I'll be able to regain some sense of how to balance baking, life, and work, and get back to posting more frequently. I'd better figure it out soon...both hubby's coworkers and my own have already started asking where the treats are!
Posted by Abby at 7:25 PM 4 comments: