Ice cream sandwiches! (and why I love Evernote)

Do you use Evernote? Everclip? More than Pinterest or any other online tools, I have fallen in love with Evernote and its ability to organize all of my recipes.

It's so simple: I read a recipe on a friend's blog, in one of my cooking mags, in a newspaper article. I clip it with Everclip and voila! It is instantly in my Evernote collection of notebooks, which I can access even when I am not connected to the internet.


Evernote organizes information by notebook, and you can set up as many as you want. I have a bunch of notebooks...a couple for work (I occasionally use Evernote as a simple word processor to take notes at meetings), and then a ton for recipes: breakfast foods, lunch ideas, dinner main dishes, side dishes, desserts, breads, food tutorials, snacks. And then I have a notebook called Weekly Meals into which I dump any recipes that I want to make this week. It's so easy to switch recipes (notes) into different notebooks, so I can pull recipes from my other notebooks into that notebook for easy access and then put it back in its original notebook when I'm done.

I seriously use it multiple times every day. When we were out west visiting my inlaws, I was able to bring all of my favorite recipes without bringing any cookbooks or magazines. Evernote even has a camera function, so I've taken pictures of some old family recipes to keep in my virtual notebooks. When I'm stuck for dinner inspiration, I just browse through my dinner folder.

Sometimes, a recipe looks good and then isn't that great; with one click, I delete it from my notebook. So easy.

Occasionally, I have recipes in my Weekly Meals notebook for quite a while, constantly reminding me that I MUST MAKE THESE...that was the case with ice cream sandwiches. I had recipes from both KAF and Deb at Smitten Kitchen saved, and I knew I needed to make one of the versions. After re-reading the recipes and the comments from SK, I decided to go with the version from KAF's blog (actually Jennie Schacht's recipe from her book i scream Sandwich). It seemed less fussy (you just bake the cookies as a large sheet and then cut them out rather than trying to roll them out and cut them before baking) and many of the SK comments suggested that, while delicious, those cookies were crispy rather than soft.


I used my normal vanilla ice cream recipe (Jeni's) and then made the other Jennie's :) sandwich cookies. After freezing them both on parchment-lined cookie sheets, I pulled them out and used cookie cutters (a heart and a small circle) to make some smaller sandwiches, and then a knife to cut out the rest in the more traditional rectangle. Rather than smearing the ice cream, I just used a cookie cutter on that tray, too; then I could be sure that everything fit together perfectly.

These were just as delicious as you'd imagine they would be. I wrapped each sandwich in plastic wrap, and put them in a tub in the freezer. They were the perfect treat at the beach today! (I used my Zak ice cream container to keep our four sandwiches cold.)

My little girl has been having tummy troubles for a while, although we've only recently realized that she's probably had some version of acid-reflux for quite a long time. I thought she was just burping incessantly to annoy me (bad mother award!). Her doctor prescribed antacids, which seemed to do the trick; but after a month or so, I began to get concerned about giving a five year old antacids twice a day...if we even missed one dose, she was back to burping and tummy discomfort. Were we supposed to do it forever? But my research indicated that long-term use could cause all sorts of problems.

Browsing online, I looked for natural helps for acid reflux, and a common one was chewing gum after meals. So we tried that. It seemed to work okay, although not quite as efficiently as the antacids. And then I thought, isn't it crazy after all of our work to switch to real foods to be giving my daughter something that is nothing but chemicals twice a day? *sigh*

Finally, I was talking to my girl friend, and she mentioned that when her little one was having GI problems, they tried kefir and the problems cleared right up. Ke-what? I'd never heard of kefir. I started researching, reading, questioning, and it truly seemed like the miracle ingredient: cures acid reflux, any tummy troubles, some even claim diabetes, high blood pressure, cancer.... Will it clean my house?! Just kidding. But seriously, I couldn't find any negatives of drinking kefir anywhere. So we bought some; I was skeptical that she would drink it, but she did and she loved it and it seemed to make her feel better. And it contained a lot of sugar. And was something like $4 for a tiny little bottle that only lasted us a couple of days, and that was only if the rest of us didn't have any.

So back to research. I discovered that if you got some healthy grains, you could make kefir yourself, and then you could decide how to flavor it and how much sugar to add...and it reproduces eternally, as long as you do it right, so you don't have to keep buying it. I purchased some milk grains from the KefirLady. It was harder than I thought; at first, it tasted and smelled really funky and we had to toss jar after jar. But after a week, I tried rinsing the grains and then I bought some fancy organic whole milk instead of grocery store 2% milk. And sure enough, we immediately noticed a difference.

Since then, we've been producing about 3 cups a day, enough for all of us to have kefir smoothies once a day, and for me to make "kefiracles" (extra kefir smoothies frozen in popsicle molds). But because kefir needs to be made daily (gotta feed those hungry grains!), if we miss a day of smoothies, I end up with extra kefir.

And wouldn't you know it, right as I had an extra batch of kefir, Joanna posted this recipe for date syrup kefir bread! Well, that was meant to be, wasn't it? Jo helpfully suggested that I could use honey (I didn't have any date syrup), and I got to work, following her instructions and bread formula. I made the preferment and left it to bubble for 18 hours. It's a little shocking to use kefir, water, flour, and honey, and have it bubble...with no yeast or sourdough starter.

Joanna's formula worked perfectly for me (I used part KAF bread flour and part KAF white whole wheat) ~ and it made a nice, supple, soft, slightly tacky dough. It smelled just like a sourdough. Like sourdough, it took a long time on its first rise; for a while, I wondered if it was even rising. But when I did stretch-and-folds, I could feel the dough deflate, so I knew there was some rising going on. I pulled out my old round banneton and shaped the dough into a boule (haven't done that in ages!). I was expecting another long rise, but the dough filled the basket in only about 90 minutes.

I used an egg wash, and baked it for...probably about 40 minutes? First at 470º and then lowering it to 360º. I tented it with foil at the end because it was getting so dark. 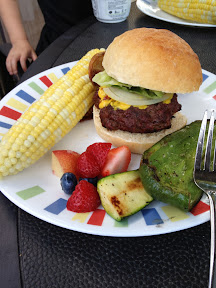