As I've mentioned in some recent posts, we joined a CSA for the first time this year. It's always fun to see what goodies are in our box, and the boxes have been getting heavier and heavier each week. 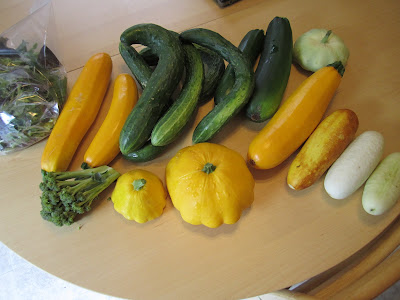 I've found it a bit challenging to deal with the variety of veggies...but in a good way! Sometimes, there are veggies I've never seen before and I have to send a cell picture to people to help me identify them. Sometimes it's challenging because there's just so much of one thing; how many pickles can one family can and eat?! (Luckily, after making six jars of refrigerator pickles last week, and receiving another NINE cukes yesterday, I discovered that one of my coworkers (a young, single, just-out-of-college guy) loves cucumbers, so I sent a whole bag home with him yesterday afternoon.)

Last week, there was a cabbage. I was brainstorming recipes for our various vegetables and listing off some cabbage-related recipes, when suddenly hubby said, "Hey, what about bierocks? Would you make me some of them?!"

Um, what? I'd never heard of bierocks before. When I searched for recipes, most were from Kansas, which explains why hubby grew up on them and I've never heard of them. Hubby said that back in Kansas, they were often sold at school fundraisers; apparently they're very good frozen. When I asked Kayte about it, she said that German ladies in the town next to where she grew up used to make them; she said they were really popular with farmers, a quick grab-and-go meal.

The recipes all seemed fairly similar and fairly simple: cook beef with shredded cabbage and onion, season with salt and pepper, place in bread dough (or refrigerated crescent rolls), and bake.

Hubby was in seventh heaven at dinner last night; he said they were just as he remembered, but with better bread; he ate his with ketchup. The baby girl liked hers plain; the little guy preferred his with mustard (how he eats hamburgers these days, too). I thought they were pretty plain, but they still made a nice, easy meal. The ultimate comfort food. 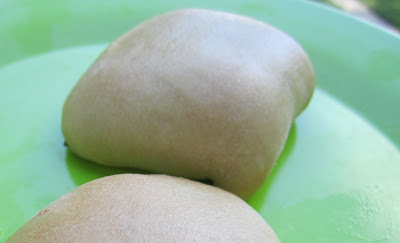 for the bread dough
1. Warm the milk. Whisk in the yeast until dissolved; let sit for 5 minutes.
2. Combine the flour, salt, sugar, oil, and egg in a large mixing bowl. Add the milk mixture and stir until it comes together in a shaggy, slightly sticky ball.
3. Mix with a dough hook in a stand mixer on 2 for 4 minutes (or knead by hand for 4 or 5 minutes). The dough will be soft and supple.
4. Form the dough into a ball and place in a large bowl coated with cooking spray. Refrigerate until ready to use. (Dough can rest in the fridge for 1 - 4 days.) OR Let rise until doubled, 1 - 2 hours.
5. Remove dough from the fridge and allow to come to room temperature, 1 - 2 hours.

for the filling
1. Heat the olive oil in a large skillet over medium heat.
2. Add meat and brown, about 5 minutes.
3. Add cabbage, garlic, and spices, and cook until softened, about 15 minutes. Cool slightly.
4. On a floured surface, roll the dough into a large rectangle, about 1/8" thick (I actually rolled mine in several batches because I was working on a fairly small board).
5. Cut the dough into 4" squares.
6. Place 1/4 - 1/3 cup filling in the center of each square (I put in as much as I could fit, and they still tasted bread-heavy). Fold the corners up to form a little packet and pinch closed in the middle.
7. Place filled bierocks upside down on a parchment lined sheet pan. Cover and let rise for 20 - 30 minutes.
8. Bake at 375º for 15 minutes.

Bierocks can be frozen: Wrap cooked bierocks in foil and then place in a large zip-top plastic bag. When ready to eat, defrost in the fridge and bake for 10 - 15 minutes at 325º. (I'd bet they could be baked frozen, too, but we haven't tried it yet. I'll update when we do!) 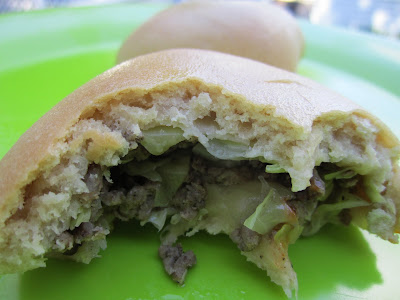