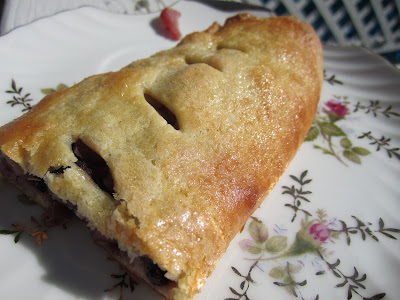 This week's pick from Bake! is mine! :) Knowing my dad's fondness for Danish and given that this is his birthday month, I picked individual Danish apple strudels.

The most challenging part of this recipe was doing the math. ;-) I didn't want to have too many sweets around, so I cut the strudel recipe in half (to make four four-inch strudels), which meant cutting the dough recipe in fourths (the strudel recipe uses 1/2 of the Christel's Danish pastry dough).

I've already made the quick Danish pastry dough, which is a yeasted dough, and used it in both Danish cheese pockets and Danish apricot pinwheels. I found this recipe to be easier than the other and the dough very easy to work with. You simply combine flour, baking powder, and salt in a food processor. Cut in unsalted butter. Pulse in whole-milk ricotta and egg yolks until the whole thing forms a ball. The dough behaved exactly as it was supposed to, spent a night resting in the fridge, and was very easy to roll out this morning.

Last night, I also made the strudel filling, another super easy recipe: cook down granny smith apples, sugar, and cinnamon; add some currants. Again, I let them rest overnight.

The strudels took about 20 minutes to roll out and shape this morning. My dough was nowhere near as neat a rectangle as the pictures in the book, but because you flip the rolled strudel over (seam-side down), no one would ever know! They chilled in the fridge for an hour, baked for 25 minutes, and cooled for about two seconds.

These were really yummy. In addition to preferring the process of making this Danish dough, I also really enjoyed the taste and texture of the finished product. As for my dad's opinion? He only got one little tiny bite because apparently apple strudels are my step mom's favorites...guess I should've made the full recipe! 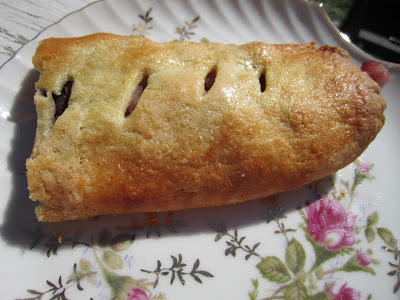