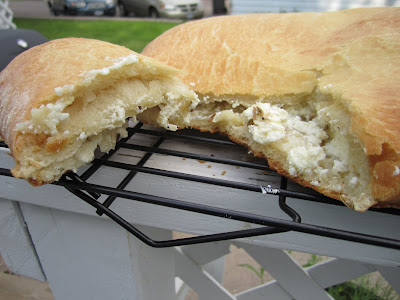 The ciabatta with stiff biga recipe makes a little over three pounds of dough, perfect for the two 9" focaccias that we devoured I made yesterday plus just enough left over for focaccia con formaggio, our other Mellow Baker focaccia choice for August.

The focaccia con formaggio is a less-time consuming recipe than the regular focaccia. You go straight from bulk fermentation of the ciabatta dough to dividing and forming the focaccia to the oven to eating (JH says to eat it warm). I imagine the entire process could take less than an hour, as there are no additional rise times.

I, of course, had actually made the ciabatta yesterday, so I pulled the remainder of the dough out from the fridge, divided it in two (about 13 ounces each), and rolled each ball into a rectangle-ish shape. One rectangle is placed on a sheet pan covered with parchment paper; it's then spread with ricotta, olive oil, coarse salt and pepper, and toasted fennel seeds. Then the second piece is plopped on top, the edges are crimped, the top is brushed with a little more oil, some vents are cut, and the whole thing bakes on a preheated pizza stone.

Because I was also cooking dinner, my focaccia con formaggio actually got some rise time while the oven was busy. I'm not sure if that's why, but mine took an additional five or so minutes before it was golden on top.

This tasted much more like ciabatta than focaccia to me. Hubby and I both thought that it was really good, but that the fennel was really strong and unexpected (and I actually only used half of the specified amount because a tablespoon seemed like too much). I can see making something like this and using garlic or...some other spice inside. I served it with a salad, fruit, and a vegetable (non-noodle) lasagna ~ a recipe I'll continue to work on and hopefully perfect and post soon ~ it's a must for dealing with all of these CSA summer squash!

Everyone in the family preferred last night's focaccia, and we really like the normal ciabatta recipe, too, so I'm not sure we'll make this one again...but not because it wasn't delicious! 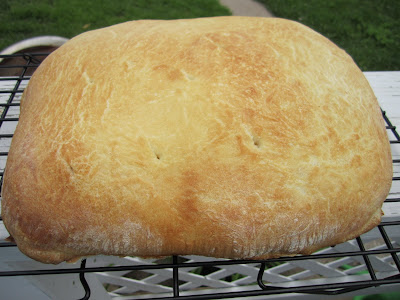