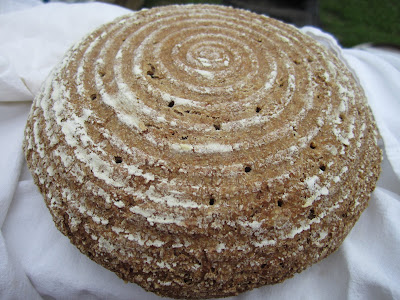 It's flashback time for me. Let me take you back to January with the Mellow Bakers' three-stage sourdough rye. This bread has more time and temperature requirements than any other bread I've ever baked, and since most of the temperatures required are around 85º, I was not willing to try it in the midst of winter in the frozen tundra where we live.

The other day, however, my kitchen table maintained a pretty constant 85º all day long, so I was able to make this bread without stressing over creating the perfect bread environment.

I actually started almost a week ago by turning a bit of my normal starter (Austin) into a rye starter. Then I began the three-stage process:

1. Freshening: combining a teeny tiny bit of my rye starter with water and more rye flour to create a paste, which ripened for five hours.

2. Creating a basic sour: mixing the freshening paste with water and more rye flour to create a stiffer starter, which ripened for about 18 hours.

3. Creating a full sour: mixing the basic sour with water and more rye flour to create a stiffer than the first, looser than the second, paste that ripened for three hours.

4. And finally, mixing all of the other ingredients: full sour with more rye flour, bread flour, water, and salt. I heeded the other Mellow Bakers' advice and left out the optional commercial yeast.

The dough is very paste-like, so I used my wet hands to knead it briefly, and then let it rest for its short 20 minute bulk fermentation.

Because I'd only made a half-recipe, I didn't divide the dough. I just floured my board and shaped the dough into a round, which I placed in my round banneton. Following Joanna's advice, I ignored the instructions for an hour final fermentation, especially given the fail I'd had earlier in the day. I let the dough rise fully, for probably close to five or six hours in an 80º room, before docking the dough with a bamboo skewer and baking it at 480º for 10 minutes and 410º for 35 minutes.

The bread appeared to have very little, if any, oven spring, but I'm guessing it's because it had such a long rise time. As for the flavor? I don't know; I haven't tried it yet. =) My dad is the one who loves the dark ryes, and he was on his way to a cabin for a week when the bread came out of the oven. So I wrapped it in linen and sent it with him. His report after about 36 hours of waiting: "Bread  is less complex than some of the other dense breads you've made. No embedded grains, seeds, etc. Predominant flavor is sourdough, with a strong sour. I will certainly eat it all, in the morning, with butter,  but don't feel like you need to make this again soon." I'll have a chance to try it when I join him at the cabin on Wednesday. 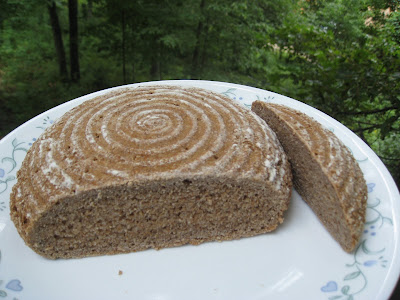 It feels good to be caught up, finally! Here are the other Mellow Bakers' three-stage sourdough ryes.
Posted by Abby at 6:40 AM