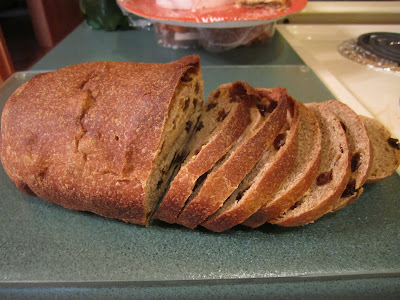 Well, what do you know...I needed a cinnamon-raisin bread for a French toast recipe I'm trying out, and when I checked the Mellow Bakers' recipes for August, guess what was on the list? Oatmeal bread! (with the possible addition of cinnamon and raisins)

This bread should be a simple one-day bread; however, I'm single-parenting this week and life got in the way...twice, actually. So the bread got two rests in the fridge: one for the bulk fermentation and one just prior to baking. Also, since I only needed one loaf, I scaled the recipe (which makes three loaves) back.

The bread is made by mixing oatmeal (soaked briefly in the water to soften it), high gluten flour (I used bread flour and a little vital wheat gluten), whole wheat flour, milk, honey, oil (I used safflower), salt, instant yeast, and ground cinnamon. The raisins (which have also been soaked in water to prevent burning during baking) are added at the end. This is the first time that I've seen a cinnamon-raisin bread where the cinnamon and raisins are baked right in the main part of the dough, rather than done as a swirl.

JH says that a 1.5 pound loaf should fit in a 9x5 pan; my loaf was about 780 g (so a little over 1.5 pounds), but despite a really, really long rise, the pan still seemed too big. (My 9x5 has often given me problems; I think it's actually a little bigger than normal.) Next time, I'd use one of my bigger 8.5" loaf pans.

I brought this bread up to the cabin with me, and we had a little taste before assembling the French toast. I think we were all a little disappointed. The cinnamon and raisins were definitely both present, but, as my dad said, "There's just too much bread flavor getting in the way!" My stepmom added that, if she's going to eat cinnamon raisin bread, she wants the sugar in there, too! So I think we all agreed that cinnamon raisin bread needs to have the traditional cinnamon sugar swirl; I doubt I'll make this one again.

UPDATE: I take back my "meh" report...this made delicious toast (with a little butter) for breakfast this morning!