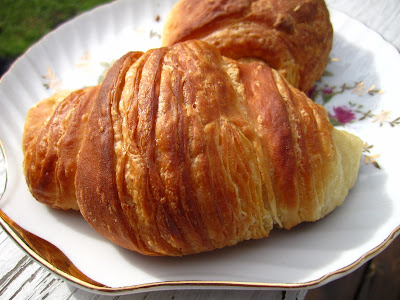 Well, another fear bites the dust and another item checked off the must-learn-to-make list: croissants! Like puff pastry, the fluffy layers of croissants are created by lamination: folding dough and butter over and over to "create many thin layers that puff when baked." Unlike puff pastry, croissants use a yeast-based dough. I used Peter Reinhart's recipe from Artisan Breads Every Day.

The starting dough for croissants is called a détrempe, made by stirring together flour (PR gives the option of bread flour for structure or all-purpose flour for more tender structure; I used a combination of both), salt, sugar, instant yeast, cold milk, and melted unsalted butter. PR says the dough will be sticky, wet, pliable. Mine was dry and crumbly. I added a bit more milk, kneaded with my hands (even though he warns against handling it much) and stuck it in the fridge. And then re-read the recipe: ahhhhhh AND WATER. Right. Not wanting to mess around with a first-time recipe, I just dumped my first attempt and tried again, this time using the right amounts of both milk and water, and ended up with a dough that was just as he described. So that went into the fridge.

Rather than rolling out the entire piece of dough into a 7" by 30" rectangle, I cut it in half. For half of the dough, I followed the instructions for making small croissants. (I ended up with eight.) For the other half, I followed the instructions for chocolate croissants, using a homemade chocolate bar for the filling (3 tablespoons of unsalted butter melted and combined with 1 cup of chocolate chips). I tried following PR's dimensions: 3.5" by 6" and they were huge so for the rest, I cut them in half. I ended up with two giant chocolate croissants and six smaller ones.

I let the croissants rest in the fridge overnight and then let them rise for two hours in the morning. They baked for about 28 minutes and, even though I'd followed PR's directions for making "small" croissants, they grew huge in the oven! And, even though I know from making scones that when I try to bake two pans at once, they burn, I baked two pans at once...and the bottoms definitely scorched. Luckily, because they're so flaky, I was able to flake off the burned parts. 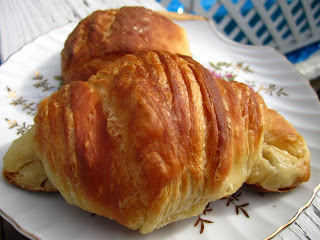 These were really yummy, flaky, and buttery. But the chocolate ones were even better; I was really sad that I didn't make more. I also discovered that my family is not all that crazy about croissants, although they were pretty popular at bookclub.

More importantly, I am so excited that I made them...they turned out...they weren't that difficult...and I could make them again! Woohoo! (Note to self: next time, bake only one pan at a time!!!) 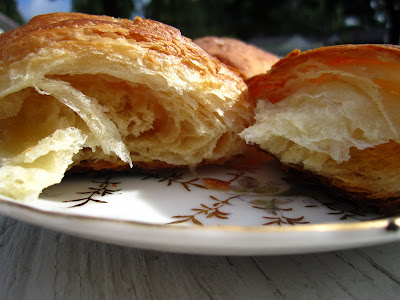