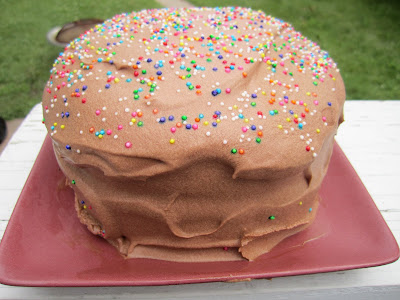 Our next recipe from Bake! is golden sour cream layer cake with chocolate buttercream frosting, chosen by Phyl for his birthday weekend. I'm not going to be around that weekend, however, and we were hosting a double birthday get-together today (for my stepdad and my nephew), so I decided I'd try out Phyl's cake...you know, just to make sure it was a good choice. =)

I cut the recipe in half, which made two perfect 6" cakes. It was an easy recipe, although because the milk and eggs in NM's butter cake recipe were replaced by sour cream and egg yolks, the batter was really, really thick. I checked mine after 20 minutes and the cakes still looked very light, so I continued to cook them for another seven minutes. I think they actually could've been taken out several minutes earlier...so note to future bakers: this is just a really light cake which never looks done, so use the poking the center test instead of color to judge doneness!

This morning, I made half of NM's basic buttercream, a recipe I've made many times before, always with great success. Even though I followed the recipe exactly, just as I always do, this frosting was much runnier than usual. It was the first time that I flavored it with chocolate, but I actually think that the bigger problem was the weather; I've only made this recipe in the winter, but today, it is hot and humid. I put the cake and the frosting in the fridge for an hour and then was able to frost the cake. Because it was so hot, I did end up keeping the cake in the fridge until it was time to eat.

The cake sliced so easily and perfectly that I was convinced that it was, in fact, overcooked. But when I took my first bite, I was happily surprised: the sour cream really kept the cake moist and gave the cake a rich, full flavor, much more interesting than a traditional yellow cake. The chocolate buttercream was a delicious accompaniment, as was the mint oreo ice cream that we served it with. This will be my go-to recipe for a basic yellow birthday cake from now on! 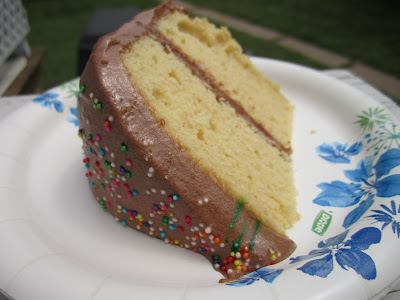