Here's my last Mellow Bakers' bread for July: olive levain, the first fail I've had in a while. 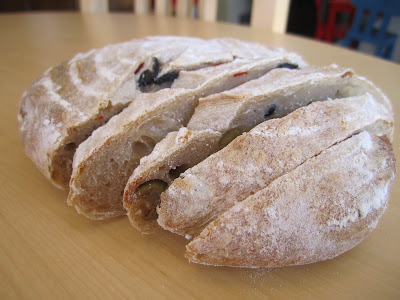 The bread is made with a liquid levain (left out for 12 hours), bread flour, a little whole wheat flour, salt, and water, and then some olives are added at the very end of kneading. My kids love olives but aren't fans of sourdough, so I just made a tiny loaf again. It had a 2 1/2 hour bulk fermentation and then went into the fridge overnight. I tend to let pure sourdoughs (ie, without any extra added yeast) rise for much longer than JH specifies because I've had this problem before. However, I know from other breads in this book that the loaves can be baked straight from the fridge, so that's what I did. There was almost no oven spring, and when I cut it later, the texture was not good; it reminded me of one of my first-ever attempts at baking a basic sourdough. Although it reached an internal temperature of over 200º, it did not look cooked; the inside was doughy, gummy, yucky.

I think, despite the texture issue, that the bread tastes how it's supposed to: very strong sourdough flavor, clear salty olive taste. I'm sad that it didn't turn out, but given the flavor combination, I doubt I'll try it again.
Posted by Abby at 12:43 PM