It's been too long! BBA #34: Pumpernickel 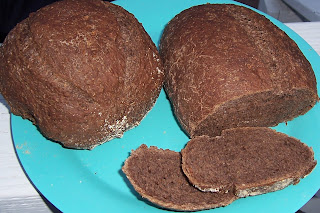 We're back from a week of spring break, and I thoroughly enjoyed being cooked for and cleaned up after and generally spoiled at my in-laws' . . . but I was also so excited to get back to baking in my kitchen today! The only problem? I still have ten breads left in the BBA Challenge, three new breads for Mellow Bakers, and a bunch of quick breads (however many I can get to; I'm determined not to obsess over baking every single one in this gigantic book!) for the Modern Baker challenge. What to do first?!
I've not been excited about the next few breads in the BBA Challenge (pumpernickel, sunflower seed rye, stollen, and Swedish rye); I'm not a big fan of rye or breads with fruit in them. But once I'm finished with those, the rest of the breads look pretty good to me, so I decided to push on.

Pumpernickel was pretty straight-forward. We'd been away for a little over a week, so I gave Austin (my starter) a couple of refreshments. After the second, he doubled in under two hours: woo-hoo, a new record! So I combined him with pumpernickel flour (which I was happy to find at our local co-op) and water, and left it to get foamy and bubbly. Then into the fridge overnight. This afternoon, I mixed the starter with bread flour, salt, instant yeast, brown sugar, cocoa powder, some oil, a tiny bit of water, and some bread crumbs made from the end of my miche. Being careful not to overknead, I alternated between my stand mixer and kneading by hand until the bread came together. It smelled really strongly of the cocoa, which was unexpected; I was curious to see if it did anything to the taste. I think I should've processed my bread crumbs to a finer consistency, and I think I should've sifted my cocoa, because the dough had a lot more texture than I've noticed in other BBACers' pictures. Oh well!

I proofed the dough in a bowl for two hours until it doubled and then formed it. I really wanted to do free-standing loaves so I could practice my slashing, but we also thought it made sense to use loaf pans because we usually use our bread for sandwiches. So since the free-standing loaves bake at a different temperature from the loaf pans, and I did not feel like baking twice, I compromised and made one boule and one batard (figuring the batard could be used for sandwiches). Then I left the loaves to rise for another ninety minutes. Meanwhile, I preheated my oven and my baking stone to 450 df.

I slashed the loaves, which went pretty well with my new lame, although I think I could've slashed more deeply. Then I put them into the oven, covered for the first 12 minutes with a roasting pan. One day I'd like to do a side-by-side comparison of the roasting pan method versus the hearth steaming Reinhart describes in his book, but the roasting pan is so much easier, who knows if I ever will!

After the twelve minutes, I realized that I'd forgotten to lower the oven temperature to 400, but the bread still needed the full thirty minutes to reach the desired internal temperature of 200 df. I let the loaves cool and then sliced into them. SHOCKING NEWS! I actually really liked this bread. I totally wasn't expecting to, but I thought it had a nice subtle rye flavor with just a hint of something extra from the cocoa. I think it will make for some great sandwiches for this week's lunches!
Posted by Abby at 7:57 PM