Not so mellow after all: Light Rye (Mellow Bakers) 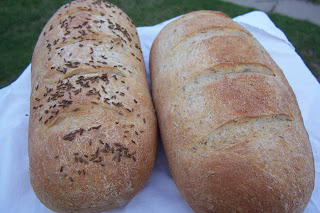 I happily joined the Mellow Bakers, liking the idea that we only need to bake three breads a month, can bake in any order we want, and can choose to skip ones we find unappealing or uninteresting or don't have time for.

Apparently, I am not so mellow after all. (Actually, this will not surprise anyone who knows me in real life.) I was pretty firmly convinced that I would not bake the light rye this month, since I've been feeling a little ryed-out with all of the recent rye breads in the BBA Challenge, plus it's not my favorite style of bread. But . . . I really can't stand to leave something undone . . . and anyway, hubby just recently informed me that he's really starting to love rye breads for his sandwiches . . . and I really wanted to vote legitimately in the Mellow Bakers' April poll . . . so I caved.

Two days ago, I made the sourdough starter: rye flour, water, and a teeny tiny bit of my mother starter. I was really surprised by how little of the starter he called for, and I'm not sure if this was supposed to rise or not. Hamelman says to leave it out for twelve to sixteen hours; I actually left mine for a day and a half because it just took me that long to baking the bread. It did not move.

Once it was time, though, this bread was really easy to make! In my bowl, I mixed bread flour, yeast, salt, caraway seeds, the sourdough starter, and water. Unfortunately, my scale quit on me right in the middle of measuring the water. Gr! This is where I really missed Peter Reinhart's detailed instructions on how the dough is supposed to look and feel at every single stage of the process. But I persevered, added as much water as I thought I should, and mixed it together with my dough whisk. Then I kneaded it in my mixer for three minutes, and judged it to look and feel just about perfect. An hour to proof (it doubled easily), and then I formed it into two oval loaves. I was going to go with Reinhart's shaping, since I had a difficult time understanding Hamelman's instructions last time, but I decided to try Hamelman again, and it went much better this time! (Maybe because I skipped his pre-shaping stage?)

The loaves rose easily again, and I slashed them (slashing also went much better this time), sprinkled caraway seeds on one, and slid them onto my baking stone. I baked them for fifteen minutes at 460 df in my steam oven (= disposable aluminum baking pan) and then for another eighteen at 440 df. Hamelman says they should take 35 to 40 minutes to bake; I checked at 33 and they were already well over 205 df, so I guess I need to check even earlier.

Results: they turned out beautifully. Hubby said they were the most professional-looking loaves I've ever baked. The crumb was very tight and uniform, the texture was light and fluffy, and the taste was very complex. The caraway flavor was really strong; I kind of wish I'd made one of the loaves without caraway, just for comparison. Rustic bread is still my favorite April bread, but this one was pretty great, too! 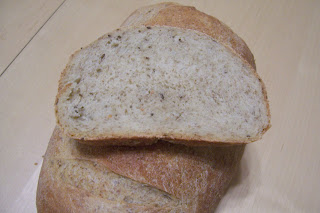