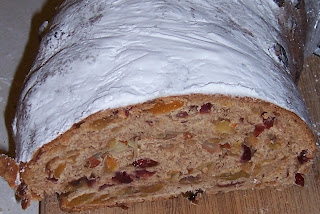 I had mixed feelings about baking stollen, the next bread in the BBA Challenge. First of all, it is exciting to bake a quick-ish bread (PR claims it takes four hours from start to finish) after all of the multiple-day sourdoughs. On the other hand, hubby and I are not big fans of fruit in our bread (with the exception of the mightily yummy hot cross buns), so I didn't have high hopes.

A few days ago, I soaked golden raisins, dried cranberries, dried cherries, and dried apricots in some rum and orange extract. I've been shaking the mixture daily, and by yesterday, most of the liquid was gone.

Yesterday evening, I mixed a bit of warm milk with flour and an insane amount of yeast. It was supposed to get "very foamy and ready to collapse" after an hour . . . mine easily filled the bowl it was in after only thirty minutes. I still waited for the full hour, and then mixed together AP flour, sugar, salt, orange zest, lemon zest, cinnamon, egg, unsalted butter, the sponge, and a bit of water. Then I mixed in the fruit.

My dough was extremely wet and sticky; PR says it should be tacky, but not sticky. I had to add a bit more flour to get it to the right consistency, and with all of the fruit and butter and such, it definitely had more of a brioche consistency than a normal bread consistency.

I let it ferment for forty-five minutes; PR says it will rise somewhat but not double. Mine didn't look like it had moved at all. Still, I plowed on and rolled the dough into a rectangle, sprinkled some almonds on it, formed it into a batard, and set it, curved, onto a cookie sheet.

After an hour proofing, it again didn't look like it had risen much, if at all. Hubby and I had a brief discussion about it . . . it was getting close to bed time. We decided to give it a few more minutes and then throw it in the oven and see what happened. After all, it's not really our kind of bread anyway.

It smelled delicious as it was baking, and it did spring up in the oven, so that was good. It took a little over an hour to reach an internal temperature of 195, and then I took it out, brushed it with melted butter, dusted it twice with powdered sugar, and went to bed.

The verdict this morning? Hubby said that it was great for breakfast with coffee. And then he emailed me, "It's the best of the weird fruity breads." It's pretty good, and hubby and I will both bring it in to work to share . . . but I don't think we'll be making this one again.
Posted by Abby at 8:10 AM