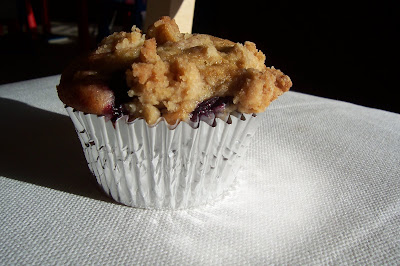 As bakers have been finishing up the BBA Challenge (I still have nine breads to go), many have been asking: What next?! Thankfully, two BBACers came up with two new challenges: Paul came up with Mellow Bakers (the first bread was Hot Cross Buns), and Phyl came up with The Modern Baker Challenge. Happily they were different enough from each other that I thought it would be fun to participate in both.

The Modern Bakers are a group baking their way through The Modern Baker by Nick Malgieri, an enormous (150 recipes!) and beautiful book that includes not only yeasted breads, but quick breads, sweet tarts and pies, savory tarts and pies, puff pastries, cakes, and cookies, bars, and biscotti. I took a little longer to commit to this challenge because, while I'm new to bread baking and have a ton to learn, I've been baking quick breads, cookies, and cakes since I was a kid.

Four things convinced me to join: #1, I have very little experience baking tarts, pies, and puff pastries; #2, I really enjoy group baking/blogging/discussing; #3, the group offers the option of not necessarily baking all of the 150 recipes, which makes it much less stressful; and #4, my husband (who loves baked goods of every variety) fully supported the venture.

Part of #3 above is that instead of blogging about all recipes in a section (sections are divied up by months: April through June is devoted to Quick Breads), we each pick a bread that we want to be responsible for. My family loves muffins, especially blueberry muffins, so Blueberry Crumb Muffins were an easy first choice for me.

Nick Malgieri says that his ideal blueberry muffin is "a sweet muffin, but one that's not overly sweet, and it must be packed with blueberries." Indeed, he calls for a pint of fresh blueberries. I suppose I could've waited until June, but they sounded so good, I was impatient to make them now. Unfortunately, given that I live in the frozen North, it would've cost approximately twelve dollars to buy a pint of blueberries . . . um, I don't think so. So I subbed in frozen. I think the frozen blues are probably bigger than fresh, which means I ended up with fewer blueberries and the muffins weren't so jam-packed as Nick Malgieri would've liked.

The recipe was easily made during morning breakfast time, especially since he indicates using the stand mixer (which I don't think I've ever used for muffins before). So into the mixer went softened unsalted butter, sugar, and light brown sugar; then the sugar; and finally milk and the flour mixture. The flour mixture included freshly grated nutmeg, which I've recently discovered, and which really is the best!

I thought the next step was interesting. He has you add the blueberries and run the mixer for a few seconds to "crush some of the berries slightly." Blueberry muffin recipes often have you take a lot of precautions to prevent the blueberries from staining the batter, so I was intrigued that he wanted them a little crushed.

I then put the muffins into the prepared muffin cups. He says that the recipe yields twelve standard sized muffins, but I had quite a bit of batter left. (I haven't made the leftovers yet, but I'd imagine it will make about three or four more muffins.)

While all of this was going on, I also made the topping: melted butter mixed with brown sugar, then flour, baking powder, and cinnamon. I crumbled the topping on the muffins, not quite sure how much to use. I ended up sprinkling maybe two teaspoons on each muffin? I still had a ton of topping leftover; I mean, at least two-thirds of the batch. I would definitely halve the topping recipe next time.

I put the muffins into a 375 df oven for thirty minutes. I checked them at about twenty-seven minutes, and they definitely looked golden. In retrospect, I should have removed them then, but I gave them the called-for thirty minutes. The result was a lightly sweet, deliciously topped, very flavorful blueberry muffin . . . that was a tad dry. I think they probably would have been perfect at twenty-seven minutes; I'll try that when I make the rest of the batter.

The kiddos gobbled them up, and my stepmom, who loves muffins almost as much as the kids, said they were the best blueberry muffins she'd ever had. I believe that with fresh blueberries and a slightly shorter baking time, this will become my new go-to blueberry muffin recipe. Oh yes, I will definitely be baking them again!

Here are some of the other quick breads that have been baked by Modern Bakers so far: