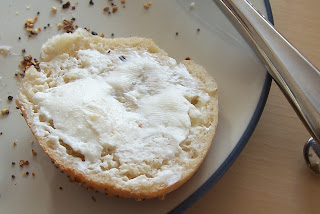 I started my bread baking journey with bagels. Having baked about two loaves of bread in my entire life, I was browsing Smitten Kitchen one spring day and read Deb's post about baking Peter Reinhart's bagels. I was intrigued and, feeling adventurous, decided to try it. It went really well, my family loved them, and I started baking them pretty frequently. In the middle of the summer, I tried a challah (also from Deb's site) and finally, in August, I stumbled on Pinch My Salt and the BBA Challenge, and the rest is history!

Having learned to bake bread through The Bread Baker's Apprentice with its very detailed step-by-step tutorials, I am still not used to Hamelman's Bread minimalist instructions, and I found myself flipping back to the BBA for some help occasionally. But in the making, I found this recipe to be very similar to the Reinhart one with which I am very familiar.

I mixed bread flour, a little vital wheat gluten (and actually one ounce of AP flour because I ran out of bread flour during my baking today), yeast, and salt. I never got around to ordering diastic malt powder and didn't find it at our local brewing shop. I still would like to give it a try one day to compare the results with using plain malt syrup, but this time, I just subbed in the syrup. Then I added the water. As with the Reinhart recipe, I let my stand mixer start the process, but this is a very stiff dough, so I soon switched to kneading by hand. Once I got a windowpane (old habits die hard!), I let it rise; I think it took about two hours to double.

One thing my family really liked about the Reinhart recipe was his option of making mini-bagels, using only two ounces of dough instead of four. The chain bagel stores around here (we don't have any independent bagelries) make enormous bagels, but these minis were just about the perfect size for the kids and me. So I decided to make twenty-four minis (two-ouncers) with this recipe, too, instead of the thirteen four-ounce bagels that Hamelman specifies.

When shaping bagels, I'd always been intimidated by the rolling it into a log and then looping it option, so I have only made the version where you roll the dough into a ball, stick your thumb in it, and stretch it all around. But I found that the traditional log and loop version really wasn't so hard, especially once I remembered Paul's tip about having a little water bowl nearby to help seal the ends if necessary. I made my two trays, stacked them in the fridge using my hubby's nifty wooden block trick, and went to sleep. 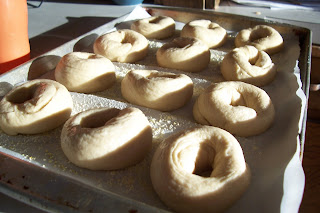 out of the fridge

In the morning, I started the oven preheating and the pot of water boiling. I mixed up my "everything" topping for hubby's and my bagels (the kids like them plain): 1 tbsp each of kosher salt, poppy seeds, sesame seeds, minced garlic, and minced onion. I've been really curious about the different baking-day methods that Reinhart and Hamelman use, so I decided to divide the bagels in half and try both techniques for a side-by-side comparison. 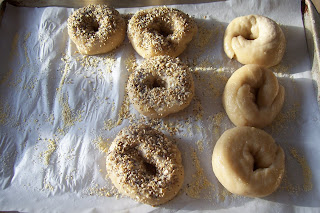 ready to go into the oven
What I discovered:
* If you add a spoonful of baking soda to a boiling pot of water with malt syrup, it will cause an eruption of water that will flood your stove, kill your pilot light, and make a big mess.
* Reinhart's bagels puff up in the pot of boiling water, but don't continue to puff in the oven. Hamelman's bagels don't puff up in the pot, but have a lot of oven spring. At the end, they were exactly the same size.
* I don't understand why Hamelman has you top them and then flip them so early in the oven. My toppings burned and the tops ended up much darker; they were not pretty when flipped right side up.
* I am not as good at the new method of forming bagels as I thought; once they puffed up, they were very clearly thinner where they'd been joined and a few seemed almost like they were going to split open (although none did).
* Texture-wise, the bagels were very similar to one another: soft and chewy inside, nice slightly-crunchy crust on the outside, similarly colored a dark golden brown.
* Taste-wise: Hubby thought the bagel baked with the Hamelman method tasted more bagel-y, but that the Reinhart version tasted better prepared with cream cheese and topping. I couldn't detect any major differences in the flavors.
* For the second tray, I went all Hamelman in method and timing, except that I decided not to flip the bagels. 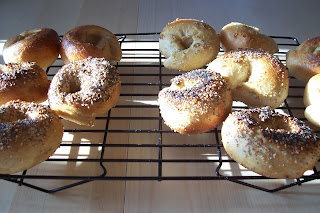 out of the oven: Reinhart method on left; Hamelman method on right 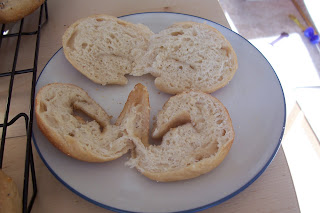 ready to eat: Hamelman method on top; Reinhart method on bottom
Verdict: I think I would maybe use the Reinhart recipe and method in the future, simply because it's the one I'm most familiar with. I didn't like flipping the bagels over and I didn't really understand the extra step of the ice water bath; it didn't seem to make much difference, except to increase the baking time. But hubby seemed convinced that the Hamelman bagels tasted a bit better, so maybe not . . . . Choosing not to flip the bagels did not change the second tray of bagels in any way (except that the topping did not burn). They were delicious and a big hit at my book club! Whatever version you choose, homemade bagels are wonderful and a great way to start a weekend!

Check out other Mellow Bakers' bagels and discussions here!