Or The Case of the Missing Yeast

This is bread #2 for the Mellow Bakers' April selection. (I still haven't decided if I'm going to make the light rye, since we are a mellow group and I'm allowed to skip . . . and I've kind of gotten ryed-out with the sourdough section of the BBAC).

This bread should have been fairly straight-forward and easy. The biggest struggle was finding a chunk of time where I'd be home at the appropriate times to attend to it.

So last night, I made the preferment: bread flour, a tiny bit of yeast, and water. I mixed it together and then kneaded it for a second on the counter before setting it aside. Hamelman calls for a twelve to sixteen hour fermentation at 75 degrees; I left it for almost eighteen hours, but it was a little cooler here, so it all worked out. It had a very impressive rise.

This afternoon, I got home from work and set about making the dough: weighed out the bread flour, whole wheat flour, rye flour, salt . . . But where was the jar of yeast?! It wasn't in the fridge door where I normally keep it. I reflected on my projects from last night: the preferment and the fruit for my stollen (next up in the BBA): I checked the bread shelf, the dried fruit shelf, the liquor cabinet, the spice cupboard, the extract shelf. Then hubby checked all of those places, plus the fridge again. And the recycling bin. And the fridge again. The knife drawer. The dishes cabinet. Wondering if I was going to have to give up on making this bread tonight, hubby had an epiphany: and there was the yeast, happily nestled among my measuring cups in my baking drawer. Sigh.

Then I worried, yeast is supposed to be refrigerated . . . would a night at room temperature have harmed it? Apparently not, because while the dough went through it's two and a half hours of fermentation (with two folds), it grew considerably.

I really tried to follow Hamelman's instructions for preshaping and shaping into loaves, but I definitely need more practice. I wasn't always sure what he was talking about; I wish the written instructions were right underneath the illustrations. Anyway, I did my best, and then again, the loaves rose rapidly. 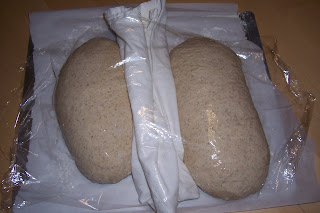 At just a little over an hour, I did my best slashing them (it did not go well) and put them into the 450df oven, covered with my disposable roasting pan. Hubby said tonight, "I kind of miss helping you with the regular hearth steaming, but this is so much easier!!" So true.

The two loaves exploded under the pan (not literally); they grew into each other and one of them actually stuck to the pan as I pulled it off, so it has a funny little dent on the end. I checked the loaves after about thirty-two minutes and they were already over 205df, so I probably should have checked them even earlier.

The loaves smelled and looked wonderful when they came out of the oven (except for the terrible slashing). Hubby commented that the crust was chewier and less crunchy than on some of the other breads (ciabatta, Italian, etc.). I was expecting more holes, but then I was also a little confused when Hamelman instructs you to pat out the bigger holes when preforming and forming, so I guess that's where they went. The texture was soft, fluffy, slightly chewy; it will go beautifully with the pasta fagioli I have planned for tomorrow night's dinner!

The taste was awesome; I love the more complex flavors from the combination of grains. We will definitely be making this bread again. 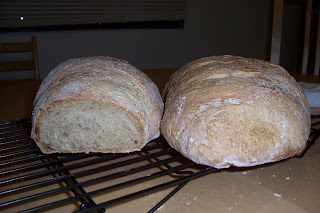 Things to work on for next time:
1. Slashing
2. Shaping
3. Keeping track of that pesky yeast jar

For other Mellow Bakers' rustic breads (including beautiful slashing), check this out!
Posted by Abby at 9:34 PM