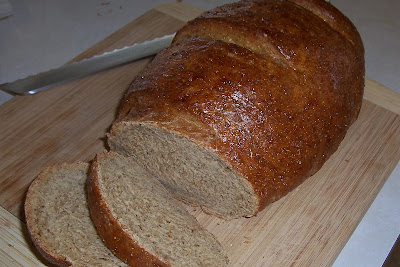 This bread was surprising. It's the second to the last of the BBA Challenge breads that I have . . . not been dreading, but not looking forward to either. (Last is Tuscan: a bread made without salt.)

It started in a very unusual way: with molasses mixed with spices. I don't love the flavor of molasses, and recently discovered that there are both full-flavor and mild varieties; I finally found a bottle of mild-flavored and have been much happier with it. I also needed dried orange peel, ground aniseeds, ground fennel seeds, and ground cardamom. I didn't want to spend a lot of money on a bunch of spices I'd probably not use again, so I borrowed my dad's fennel seeds and cardamom . . . I'm pretty sure that both bottles were from about 1972, although they still smelled strongly, so I figured they were okay.

I ground up the seeds (used hubby's coffee grinder . . . shhhh! don't tell!), mixed them and the orange peel with the molasses and brought the whole mixture to a boil. Once it had cooled, I added in some double-sifted rye flour and a bunch of my starter. It had a very strange smell for a bread sponge, that's for sure!

It foamed up over night, and this morning, I added in bread flour, a little vital wheat gluten, instant yeast, salt, light brown sugar, and some melted unsalted butter. I kneaded it for about three minutes and then let it rise for a couple of hours.

I decided to make a large two-pound loaf, so I didn't split it, and just formed the whole thing into a batard. And then another unusual step: with this bread, you slash it prior to the second rise instead of just before baking. This allows the slashes to really open up.

After its second rise, I brushed the loaf with an egg wash and baked it for about forty-five minutes.

When it was just slightly warm, we cut into it, still not expecting much. And . . . we loved it! The crust is just a little crunchy and slightly sweet. The texture is light and chewy. And the flavor is quite unique: the anise is really dominant, and while normally not a favorite flavor of mine, it just works for me in this bread. (I'm wondering if its so dominant because the other spices were so old??) Hubby, the baby, and I have already eaten several slices each, warm with a spread of butter. I can't believe how much I like this bread!

UPDATE: Here's what we did with the leftovers (courtesy of Janice): http://roundthetable.net/2010/04/21/swedish-rye-bread-pudding/ and it was AWESOME!
Posted by Abby at 2:51 PM