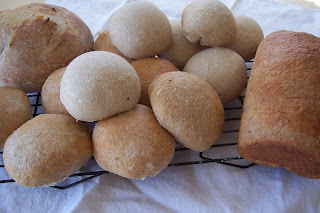 I have been dwelling on this bread for months. I'd never heard of wild yeast before reading The Bread Baker's Apprentice, and when I learned that I would have to create my own (?!?) I wasn' t sure what to expect. But I knew to be nervous.

My little guy turned three on Friday. We planned a family party for Sunday. I like to keep things easy for these kinds of parties, so I just serve make-your-own sandwiches, fruits, veggies. That way I can put all of my energy into making an awesome cake, visiting with our family, and enjoying the day. 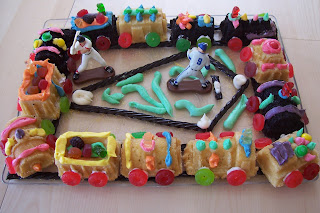 I found an awesome train cake mold on clearance a couple of years ago. The little guy is a big fan of trains and baseball, and our ballpark (minor league . . . my dad has season tickets) sits right against railroad tracks so we watch the trains go by during all of the games. Thus the train with the baseball players in the center.
So this year, to keep the stress-level low, I decided that instead of purchasing rolls, I should combine the birthday party with BBA Challenge #30 and make my first ever sourdough bread. You know, the one that's been making me nervous for the past several months. I also decided to make a double batch so that I could see which of my starters was a keeper and use up or discard the other one. Hm . . . I guess I need to work on stress-reducing choices.

I already wrote about my starter adventures. I've been feeding both starters about once a week and they've been rising, although still taking a really long time to do it. But it's also really cold here, so . . . I've blamed it on the weather. Paul from Yumarama helped me again when I was trying to figure out the relationship between my mason jar full of starter and the barm that Peter Reinhart says I need to make my firm starter:


"Glad to hear your new pet is doing well!

You don’t need to turn it into anything, your starter already is “barm”. Barm is simply Reinhart’s (incorrect) name for starter. So when you see the word “barm” just think “starter” instead.

Now what you need to do is get yourself 4 oz. of starter for the Basic Sourdough recipe. If you’re keeping 3 oz but cutting back to 1 oz of old starter at each feed, then you’re removing 2 oz of excess. So take out that 2 oz of excess starter, put it in another jar and add 1 oz of water plus 1 oz of flour and let it expand out on the counter for a couple of hours until it’s just about peaking. You now have your 4 oz of starter for the recipe.

With that other 1 oz, feed as usual, let it rise for a couple of hours on the counter until it’s increased to almost double then get Mom back into the fridge, safe and away from the baking stuff. I might also recommend you do 1 oz of old starter and 2 oz of water + 2 oz of flour which gives you a feed ratio of 1:2:2, this gives your starter more food. This will then give you a 5 oz Mother Starter and 4 oz of excess to make bread with at each feed. And if it happens that you aren’t baking that week, you’ll be discarding just 2 oz of flour, not a big deal."

Extremely helpful information. And I'm so glad I didn't try to figure out what to do on my own; I assumed I had to make a new barm, so I would've made myself go through several extra (and totally unnecessary) steps.

I divided each starter into two on Friday evening: a batch to remain a mother starter in my fridge and a batch to become my Peter Reinhart-termed barm for my bread. They took all night to double. But once our thermostat kicked into "awake" mode this morning, they both rose right up. 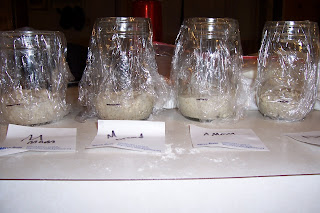 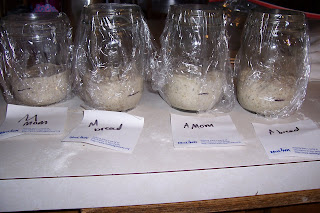 I stuck the mother starters back into the fridge and turned the others into firm starters by adding more bread flour and just a little water. Peter Reinhart says they should double in four hours and to keep checking every hour if they haven't. Mine had barely started to rise at four hours. It's cold and our house is drafty, so I brought them into the kitchen and let them sit nearby while I baked a loaf of oatmeal bread from Mags, to have another option for sandwiches at the birthday party. (It smelled heavenly! I've been eyeing this bread for weeks!)

It worked; after another few hours, they doubled. 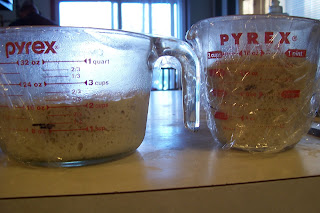 Instead of retarding them overnight (I just didn't have time, given how unreliably they were rising; or rather, reliably sloooooooooowly), I went right into mixing the dough, using eighteen ounces of bread flour and two of whole wheat flour. (Three reasons: one, I'm getting low on bread flour and was worried I wouldn't have enough to make my double batch; two, I was hoping the wheat might give the yeasties a little push and make them rise a little faster; three, it makes me feel better to feed my family some whole wheat in their bread.)

I mixed for four minutes in the stand mixer, let the dough autolyse for fifteen minutes, and then kneaded by hand. The dough was really supple and smooth, just a little tacky, and very nice to work with! After a few minutes kneading by hand, I had a perfect temperature and a perfect windowpane. 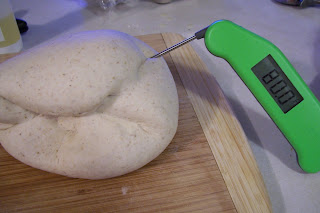 And then the wait . . . again, it took way longer than the suggested three to four hours to double.

This post on The Fresh Loaf made me feel a lot better, assuring me that colder temperatures in the winter lead to seemingly-stalled starters and extremely long rise times. He also states that white flours rise more slowly, as do firmer doughs. So it seems I've hit just about every indication of really really slooooooow sourdough rises.

At 1:00 in the morning, I woke up and sure enough, one of the containers of dough had almost doubled and was ready to be shaped. So I went downstairs and formed it into one twenty ounce boule and seven almost-four ounce rolls. They sat out for the rest of the night and were ready to bake this morning.

This morning, I also realized that the other dough wouldn't be ready on time for my second batch of sourdough, so I quickly (love how quick this recipe is!) whipped up another batch of Mags' oatmeal bread and made it into rolls. While it was rising, I baked the sourdough.

I baked the rolls first. I put them into a 500 df oven, turned it down to 450, covered them with a roasting pan for ten minutes (I love this new easy steaming technique!), and then baked them for about another ten minutes. They had incredible oven spring after that first ten minutes! While the oven was going back up to 500, I slashed the boule; still not great, but way better than my slashes have looked the last few times. I slid it onto the baking stone, cooked it (with the lid on) for about ten minutes, and then uncovered it for the last 20 minutes of baking. I probably could have used the lid for a little longer; the boule didn't spring up as much. Still, they smelled and looked like sourdough!

At the party, I quickly welcomed all of the guests and then got down to the important matters: slicing open the loaves, taking pictures, and taking a taste! 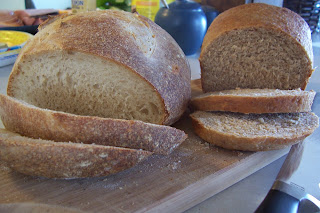 The oatmeal bread (on the right) was fantastic. This is definitely the quick, easy, delicious multigrain bread that I have been searching for. I will make it for our weekly sandwich bread now, and I'd love to experiment with adding a few other grains.

I'm not a huge sourdough fan, but the bread on the left is my pride and joy. I tried to explain to the hubby what it feels like . . . to make bread using yeast that I made is just the coolest thing ever. A fellow BBA Challenger over at Salt and Serenity called baking her first sourdough her bread bat mitzvah. I love the comparison! After you produce your first successful sourdough, you can finally proclaim, "Today, I am a bread baker!"

Several guests at the party who are big sourdough fans said that this sourdough was great. I am excited to see the flavor develop as I continue to nurture my starter. And I am excited to bake the second batch and compare it with the first to decide which will be the keeper! 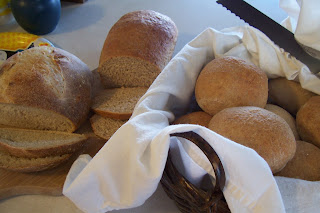