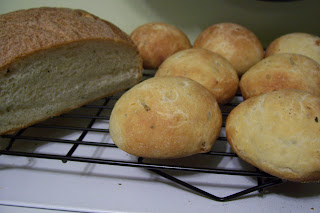 This is hubby's favorite kind of bread. Whenever we need an easy, fast dinner, we'll pick up a rotisserie chicken and a loaf of bread (or we used to, before I started baking my own). I'd choose a hearty multi-grain, but hubby always goes for an herb and garlic artisan loaf.

Peter Reinhart's potato rosemary bread is a two-day affair, although on the first evening, all I had to do was mix up the biga (pre-ferment) and make a small batch of mashed potatoes. I meant to make mashed potatoes for dinner so we could just use the leftovers, but it never happened. Never fear; hubby and I happily ate the rest of the potatoes (that I didn't need to save for the bread) as a late-night snack!

Early this afternoon, I mixed everything together. The ingredient list for this bread was a little out of the ordinary: in addition to the biga, bread flour, salt, yeast, and water, I also added freshly ground pepper, mashed potatoes, and chopped fresh rosemary. 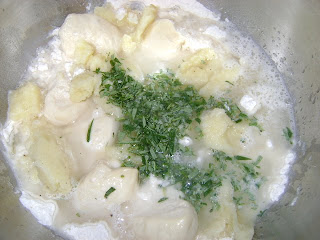 I started this one in the mixer, but it was still very shaggy after the suggested time, so I flipped it out onto my counter, allowed it to sit (while we put the kids down for nap), and then continued by hand. I found that it took quite a bit more flour and a lot of time to get the dough to 77 degrees and a nice windowpane. But given how busy things have been around here, it was nice to spend some time kneading!

And then I flattened out the dough and added . . . roasted garlic! I'd never roasted garlic before, and although I thought I'd bought a head of garlic the last time we were at the store, apparently I hadn't. I quickly jumped online and read various posts about this bread to see what reviews the garlic had received . . . it seemed pretty unanimous that it was a necessary ingredient. So hubby ran out to the store, while I preheated the oven. Luckily (because we had to leave for swimming lessons in about 30 minutes), I found this post from Paul at Yumarama about how to roast garlic more quickly and efficiently. It worked great, the house smelled wonderful, and it was definitely a necessary ingredient to this bread! Anyway, I kneaded in the roasted garlic and then left the dough to double.

It doubled very quickly . . . right at an hour, I believe. I divided the dough in two and shaped half into a boule and half into two ounce rolls. An hour later, the dough had doubled again, so I preheated the oven. The rolls cooked for 20 minutes, the boule for 35. The rolls probably should have been taken out a few minutes earlier; the bottoms were at that almost-burnt stage that adds a slightly bitter taste to the bread.

The boule, on the other hand, was perfect! I agree with some other BBA Challengers who talked about stepping up the rosemary and garlic next time, but we really enjoyed the bread as-written, too. The bread was soft with a light crust. We ate this with chicken-noodle soup tonight and the garlic rosemary mixed with the thyme and parsley in the broth was an outstanding flavor combination. 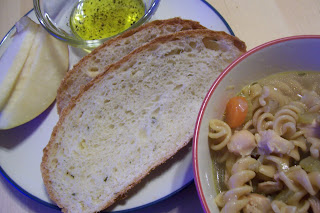