I was really looking forward to this bread. For one, we are a big pizza-eating, pizza-loving family. We eat pizza at least once a week. Hubby even has certain categories: frozen pizza, home-made pizza, delivery pizza, restaurant pizza, and take-and-bake pizza. If he's in the mood for one category, another will not suffice. Plus, I was really eager to put the stress of the panettone behind me. Lastly, this recipe seemed to get really good reviews from just about everyone in the BBA Challenge. Maybe some of them can help me figure out what to do to make this process go more smoothly next time (because there will be a next time).

I started by mixing everything together last night: bread flour, a little whole wheat flour, yeast, salt, some olive oil, and water. Just like the ever-so-delicious pain a l'ancienne, this bread requires very, very cold water (I put ice cubes in a measuring cup until the water measured 40.2 degrees). I put everything into the mixer where it came together perfectly after about 5 minutes. Although it goes against my bread-baking instinct (it was the perfect texture for a loaf of everyday sandwich bread!), this bread is supposed to be sticky enough to clear the sides of the bowl but stick to the bottom, so I added another bit of cold water until it looked like this: 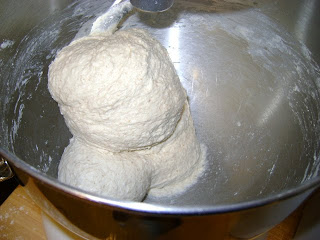 I divided the dough into six six-ounce portions (sticky, sticky portions!), sprinkled them with flour, and rolled them into a ball. Three went onto a sheet pan: 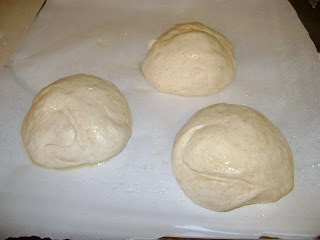 and three were rolled in olive oil and then dropped into freezer bags and placed immediately into the freezer for later use.

This afternoon, I took them out a couple of hours before we were ready to make them. Nothing changed; were they supposed to grow? Then I put my pizza stone on the bottom of my gas oven, cranked the oven up to 550 degrees, and started cutting up our toppings.

Here's where things began to get challenging. Did anyone else have trouble trying to stretch the dough into a circle? I was game to try Peter Reinhart's method: pick up the dough ball carefully, use the back of your well-floured hands to carefully bounce the dough while oh-so-gently stretching it out. The second I tried, the dough tore. Terribly. In a million places. I quickly put it onto my prepared sheet pan, covered in corn meal, and tried to repair the tears while still trying to stretch it out. It was nowhere near uniform. Plus, the smoke alarm started to go off. I had scoured the bottom of my oven, but our smoke detectors just do not like any temperature over about 450 degrees. I was reminded of Anne Marie, who talks about having to call the alarm company to disconnect her smoke alarm whenever she's starting another high-temp BBA recipe.

We spread the misshapen non-circles with sauce. I took Peter Reinhart's advice and tried to use much less sauce and a much simpler sauce than normal. Usually, we spice it up. This time, I just:
Put 2 tbsp olive oil into a large skillet over medium heat.
Added 1/2 of an onion, finely chopped, and
2 tsp minced garlic.
Sauteed for about 5 minutes.
Then added 1 28-oz can crushed tomatoes,
1/4 tsp salt,
1/4 tsp pepper,
1 tsp Italian seasoning,
and simmered for about 30 minutes, until thick.

Then toppings. Topping the pizza was the best part (especially after the stress of the shaping) because the kids came over to help top their own pizza.

And then into the preheated oven. Here were some more problems. I very generously covered my sheet pans with corn meal, but there was no way this pizza was going to slide off nicely onto the pizza stone. Advice?! We used our little pizza peel to scrunch the pizza half off of the pan and onto the stone and then tried to use it to straighten the pizza back out once on the peel. It only sort of worked. Plus, all of the corn meal spilled onto the floor of the oven and immediately started to smoke and burn. The smoke alarms had a field day. 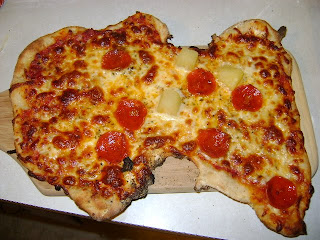 the kids' fish (pepperoni and pineapple) 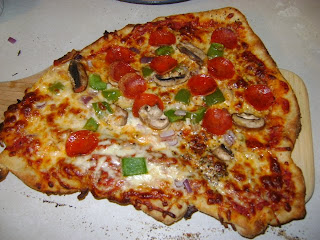 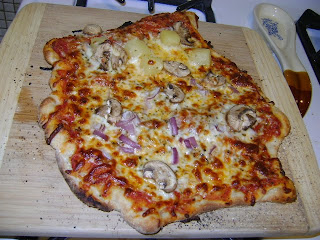 And they tasted pretty good. In general, hubbie and I both like thicker, chewier crusts . . . any way to make this recipe bake up a little thicker? We also noticed a lack of wow-factor just because, although I had never been a bread baker before this challenge, I have been baking my own pizza crusts for years. But hubbie still admitted that this was the best pizza crust we've ever made at home, and (given that it is Super Bowl Sunday, which gives us permission to overeat for the day) he did eat his entire pizza in one sitting.

The little guy had four pieces and even the baby dove right in:

Definitely a make-again recipe, but I'll take any advice to make the shaping and baking go more smoothly next time!!
Posted by Abby at 6:08 PM