Pugliese (BBA #29) and the Best Idea Ever

On Wednesday, December 16, my life was forever changed. Well, not really, but on that day, I read fellow BBA Challenger Mags' post about making pizza buns and I knew they were in my family's future. I shared the post with the hubby, who started salivating on the spot. And then I got caught up in the rest of the Challenge and promptly forgot about them . . . until yesterday.

Did Peter Reinhart foresee Nicole's Challenge? I couldn't believe it when I read ahead from the potato rosemary (and garlic!) bread and realized that the next bread used exactly the amount of biga left over (11 ounces) and 2 ounces of my leftover mashed potatoes! It was like fate! We were meant to bake these two breads within days of each other.

But I still had a bunch of potato rosemary bread that we were working our way through, and we didn't really need two more loaves. Oh, I know I could've given them away, but then I suddenly remembered Mags' post!

So yesterday afternoon, I took my biga out of the fridge to let it warm up to room temperature (and then took a nap, but I guess that's not really pertinent). I couldn't find the fancy durum flour that's traditional for this bread, so I used some semolina (about 2 1/2 ounces) and then bread flour for the rest. I mixed the flours with the biga, salt, yeast, leftover potatoes, and the minimum amount of water. Peter Reinhart warns that it's a sticky dough, so I used my stand mixer. I had to add some more water to get the dough more sticky, and I'm guessing I still could've used more. I found that the dough picked up a lot of flour from the stretch-and-fold and wasn't nearly as sticky by the end; probably why my finished product didn't have any big holes.

Right as I finished mixing and was about to start the stretch and fold process, I discovered that we were going to take an unexpected fieldtrip to my dad's house. So I got a baking sheet, put the cutting board with my dough on it (covered with plastic wrap), grabbed my flour, oil spritzer, and timer, and headed out the door. 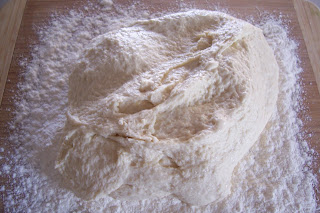 wet dough just after being dumped out of the mixer

I finished the stretch-and-folds at my dad's and had to borrow a bowl. You can see how the dough really firmed up (although I hadn't thought to bring my camera, so I had to use the hubby's cell phone). 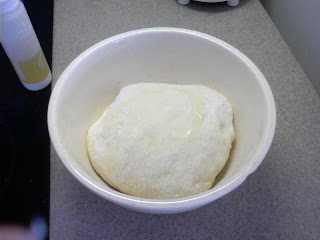 into the bowl after three stretch-and-folds 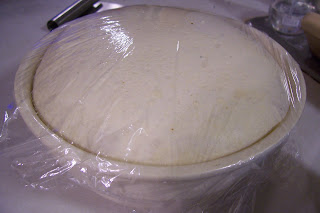 after two hours of undisturbed rest
Mags' recipe (which she adapted from this recipe from the King Arthur Flour's web blog) only called for 1 1/2 pounds of dough and Peter Reinhart's recipe made 2 pounds of dough, so I decided to make a mini (1/2 pound) loaf with the rest of the dough.

I formed this one into a boule, put it in an improvised banneton (a mixing bowl with a cloth in it), and let it rise for almost two hours (it was only supposed to rise for 60 - 90 minutes, but we had a lengthy bedtime last night). I then baked it with my adapted-hearth baking method (covered with a roasting pan for the first 10 minutes) and then for an additional 5 minutes, until it was at a perfect 205 df in the center. 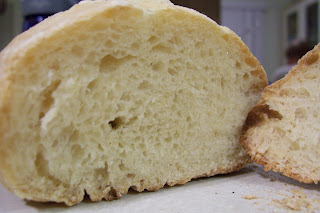 As I said earlier, no big holes at all, but the taste was fantastic. The loaf was gone within 30 minutes of first slicing it. I will definitely be baking this bread (as a bread) again.

I flipped out the rest of the dough onto an oiled counter and rolled it into a 12 x 18 rectangle with an oiled rolling pin. It was a little sad to hear and see all of the bubbles popping as I rolled it out. I then pressed 1 cup of mozzarella and a meat mixture I had made earlier (1 oz pancetta, 3 oz pepperoni, 1 finely chopped onion, 1 tsp minced garlic, and some chopped green olives for the hubby's half) onto the dough. I rolled it up into a log (starting with the shorter side). 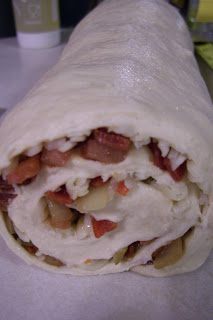 and then used my trusty dental floss trick to divide it into twelve rolls. 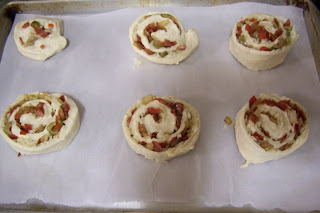 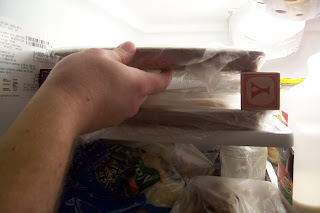 and we let them rest overnight.

This afternoon, we took them out of the fridge, let them rest for 90 minutes (they probably could've used a little more time to rise, but we were hungry!), and then baked them at 325 df for 15 minutes. I spread a spoonful of pizza sauce (same sauce recipe I used for the pizza napoletana) and topped them with shredded cheese (5 oz mozzerela mixed with 3/4 oz parmesan and 1/2 oz asiago). 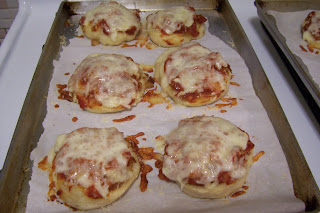 Crumb shot from the pizza buns: 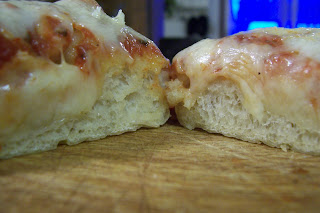 Best comments from dinner tonight
Hubby: "Ouch! Hot! But can't stop! So good!"
Little guy (who will be 3 years old on Friday!!): "Oooohhh, delicious. Pizza buns, I love you sooooooo much!"
Posted by Abby at 6:49 PM