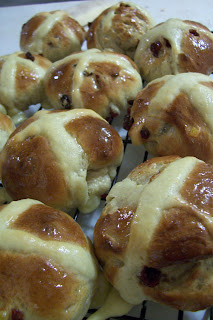 I was about twenty breads into the Bread Baker's Apprentice Challenge, when I suddenly had the horrifying thought: Whatever would I do when I was finished with all forty-three breads?! Bread baking, and more specifically, trying and experimenting with new breads while following other people's bloggy adventures, had become a part of my daily life.

Thankfully, one of the advantages of starting late and being behind on the BBAC is that other people were faced with this dilemma before me. And Paul from Yumarama stepped in with the creation of the Mellow Bakers, a group baking slowly, mellowly if you will, from Hamelman's Bread. I had been eyeing Bread since embarking on my sourdough research; you can't study sourdough without reading a million different posts about Hamelman's Vermont sourdough. So of course I joined in.

As more of a novice bread baker than many of the other bakers I follow, I noticed a distinct difference between Hamelman's style and Peter Reinhart's. I definitely missed the abundance of tutorial-like direction that P.R. gives all the way through every recipe. However, Hamelman has a hefty how-to section at the beginning of his book which I've yet to explore (Priority #1 on my reading list over spring break!), so maybe there is more information than I realized.

My first struggle with this bread was finding candied lemon or orange peel. I could. not. find. them. anywhere. I mean anywhere. I went to and/or called the three large grocery store chains, the three major whole foodsy places, and two cooking stores. Everyone had the same answer: "Oh, we carry those during the holiday season . . . . ." I knew I could order online, but wanted to get this bread baked before spring break. So finally, I called it quits, grabbed an orange from my dad's house, and made my own. There were a ton of how-tos online; unfortunately none of them were even remotely similar. There seem to be a million and one ways to make candied orange peel; anyone have a favorite? I loosely followed this one from NPR, except I omitted the chocolate, only used one orange, omitted the corn syrup, and used 1/2 cup water and 1/3 cup sugar.

Anyway, I figured this would be an easy bread to throw in on a weeknight. Only four hours from start to finish. But when I first made my sponge (milk, yeast, and sugar), which was supposed to triple or quadruple in forty minutes, it hadn't even doubled after over an hour. Hm. Not sure why, but I decided not to mess with it. I tossed it out, started again, heated the milk a bit this time, and it easily tripled in thirty minutes.

I used my paddle attachment to mix the rest of the bread flour with butter, and then with egg, allspice, salt, and more sugar, and I finally added the sponge. Hamelman continues to use the word "mix" rather than "knead," but I found that my paddle was seriously overwhelmed after about two minutes, so I switched to my dough hook. And then my dough hook got seriously overwhelmed when I threw in the craisins (used in place of currants) and candied orange peel, so I kneaded by hand at the end.

Next non-mellow moment: As my rolls were in their final proofing stage, I started to make the crossing paste. I melted my butter, mixed in sugar, lemon peel, vanilla, milk, a little bit of egg, and some flour (pastry and cake). And then I flashed to everyone else's post about their piping paste: "it is simply pastry flour, oil, and water" says Paul. I go re-read their posts; I re-read my book; I check the title and author of my book and the page number of the recipe; I check to see if there are different editions of the book. No idea, but mine is definitely not a simple flour, oil, and water paste. I proceeded with the recipe in my book, crossed the rolls, and baked them for 14 minutes.

Maybe not the most mellow bread ever, but all that matters? They're pretty darn delicious! I love the slightly sweet, slightly citrusy flavor, and the soft, slightly fluffy texture. If it wasn't an hour past our bed time, I'm sure hubby and I would demolish more than our one taste-test. Make that two; hubby just polished off another while I was posting.
Posted by Abby at 10:33 PM