While making this bread, I was very glad to be behind other bakers on the BBA Challenge. I was well-prepared for a dough that didn't behave like any other: dough with the consistency of play-doh and next-to-no rise.

I wasn't really prepared for just how weird it would be, though.

Two nights ago, I mixed my starter Austin with twice-sifted rye flour (I couldn't find white rye) and enough water for it to come together into a firm ball. I set it out to rise . . . which it didn't. Not after four hours, not after eight hours, not after an entire day. I was thinking about giving up and just trying this one again next weekend, when I read on a fellow BBACer's blog, Family & Food, about how her firm starter never rose, but she went ahead with the recipe and just loved this bread.

So I tried it. This morning, I mixed the firm starter with my soaker (also from last night: pumpernickel flour soaked in water), added more twice-sifted rye, some salt, caraway seeds, and a bit of water. Knowing that rye is finicky and you don't want to overwork it, I just mixed it by hand in my big mixing bowl, let it rest for several minutes, folded it over a few times, and called it done.

I did not have any hopes of it rising, but when we returned home from our morning out, I thought I detected some lift!

I formed it into two batards, started to let it rise for the final time, and then changed my mind. The loaves were really tiny and we were hoping for sandwiches tonight, so I pulled them off the baking sheet, kneaded them together, formed them into a loaf, and stuck them into my 9x5 loaf pan.

Not a lot of rise, but again, after two hours I detected a slight change. Same thing while it was baking, not a lot of rise, but a slight change. I pulled it out of the oven when it hit 200 degrees after about fifty minutes, the first twenty covered with a roasting pan. It was a heavy brick. Still, I knew rye bread was supposed to be dense, so I wasn't discouraged, just curious. 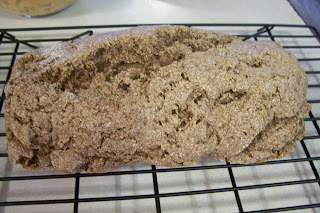 After it cooled slightly, I tried to slice it for our sandwiches. Apparently I hadn't kneaded the two batards together well enough because every slice split right down the middle where the two batards had joined. Not to be defeated, I made mini-sandwiches! 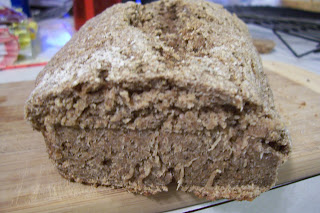 Homemade corned beef, homemade thousand island dressing (both ATK recipes), swiss cheese, and sauerkraut on rye, brushed with butter and cooked for five minutes in my two-years-old-but-never-used grill pan with panini press (I won it at a charity auction). It worked beautifully! The corned beef was awesome, as was the dressing. The rye bread tasted like rye bread. Next time, I would definitely play with the proportions: thinner slices of bread and more corned beef. And I don't think I'll make this recipe again; the dough was just too weird. But I'm guessing the sandwiches would be fantastic made on last week's New York deli rye. 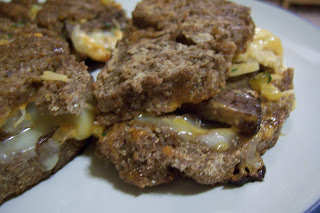