I have no idea.

I started my very first sourdough starter (after spending most of my life not even knowing that such a thing existed) midway through the BBA Challenge. I wasn't very good about following directions or keeping to a schedule, so when it seemed to stall, I figured it was done and started another one. The second time, I was very careful about keeping to a schedule and following directions, and I even wrote everything down. Right as the second one (Marge) came to life, my original one (Austin) rallied, so I kept feeding them both. I wrote about my adventures here.

This weekend, I baked my first sourdough. What a feeling! I had planned to make a double-batch of the BBA basic sourdough recipe, so that I could decide which starter worked better and/or had better flavor, discard the other one, and move on to a simpler life of only maintaining one starter.

Well, as I wrote about here, Austin moved incredibly sloooooooowly, and Marge . . . was even slower. So I only made the one batch (using Austin) and left the other one on the counter. The next day the dough made with Marge was finally ready to be shaped. I put the shaped loaves on the stove in the hopes that it would help them rise (it is incredibly cold here) and . . . something happened. I don't know what, but it wasn't good. When I went to transfer the first boule to the prepared sheet pan, it stuck to the napkin I'd used inside the proofing bowl, totally collapsed, globbed all over my hands, the counter, the sink, the floor, the trashcan. I don't know what it was, but it wasn't bread dough by that point! The second one (luckily!) transferred easily, so I put it on the baking stone (which I'd forgotten to preheat for an hour) and baked it for ten minutes with its roasting pan cover on. Then I realized I'd forgotten to lower the oven to 450 df, so I lowered it for the final ten minutes until it was a nice golden brown and the proper internal temperature.

With the first loaf (made with Austin), I was excited by the oven spring. With this one? None. It did not rise even one millimeter in the oven.

Well, I figured, at least this was only a test. So now I know: Austin is the better starter. He rises a little sooner and clearly has much more oomph in the oven.

And then I tasted the flat loaf made with Marge. And it tasted like sourdough. Way more like traditional sourdough than Austin had.

My family doesn't like sourdough much, so today, I brought both loaves into work for a taste test with the lunch bunch. The two self-professed sourdough lovers both thought Marge (the flat loaf) had the better flavor. Everyone at lunch agreed that Marge had a more sourdough-y flavor, although they were mixed as to which bread they liked more and which bread had the better texture. 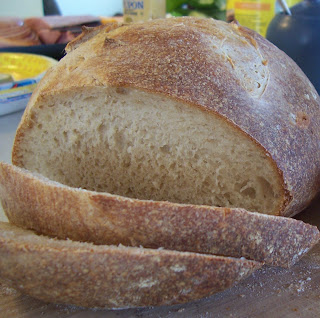 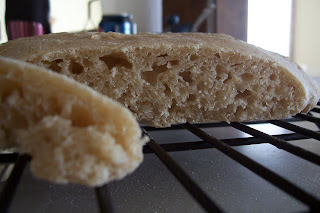 Marge
second starter; rises reliably but more slowly; absolutely no rise in the oven; much chewier texture; much more sourdough flavor
Posted by Abby at 7:32 PM