From tragedy to triumph

Or from cake disaster to delicious dessert, at any rate: bombe cake to the rescue! 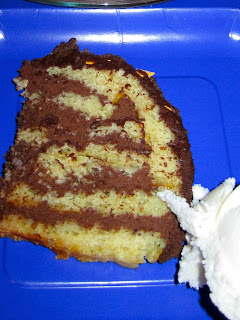 My baby sister's birthday is New Year's Eve. She loves chocolate, but we were going to celebrate her birthday in the evening, and frankly, too much chocolate in the evenings makes for a really impossible bedtime for us. When I saw this new recipe for a moist yellow cake (better than a box!) with a fudgy frosting from KAF, I thought it might be just the thing.

Late the night before our party, I baked up the cake. I followed the recipe exactly, but when I opened the oven, I saw this: 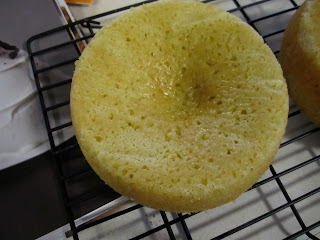 My cake had completely fallen in the center. I'd never seen anything like it; I'm not sure the picture does it justice, but the sides were a full 2" high and the center had sunk to maybe 1/2". There was no way frosting could salvage this cake. I was really bummed; I definitely didn't have time to make another cake. What to do?

Suddenly I was hit with inspiration: what if I tore the cake apart and used it to create something like the ultra-successful devil's food bombe I made this summer? I knew it would need a thicker frosting than the fudge frosting that was posted with the cake recipe, so I browsed around some more on KAF's website and found this one: super-simple chocolate frosting, supposedly quick and easy, and should be thick enough to hold the cake together. With my plan in mind, I went to sleep. 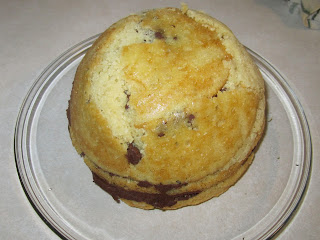 The next morning, I got to work. I sliced the cake into layers (because of the sunken middle, most were missing a center) and used pieces to fill up the bottom of a small mixing bowl. I spread some frosting (which really was quick and easy...and delicious!), then more cake, more frosting, more cake, and on, until I reached the top of the bowl. I was able to get two slices that were big enough for the top of the bowl and actually had centers, so they covered the top of the bowl. After several hours in the fridge, I slipped the cake from the bowl and used the rest of the frosting to cover the cake. 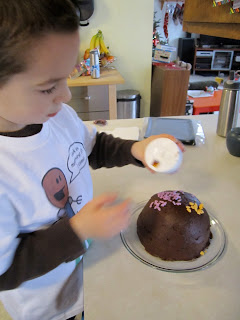 It was a huge hit, and no one knew that this cake was not what was intended (until I told them, of course). :)

Happy birthday, little sister!
Posted by Abby at 10:06 AM