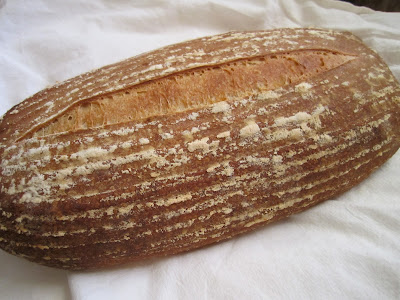 Here we are at the final month of the Mellow Bakers...hard to believe! I actually made the other two January breads already, the semolina in December when I was looking for a quick one-day bread for dinner one night and the five-grain levain over a year ago.

This weekend I refreshed my starter in preparation for my last three breads (my last January bread and two December ones that I missed). When it was good and bubbly, I mixed up sourdough builds for all three (I later realized that I forgot to make the soaker for the sourdough seed bread, so I only ended up making the 66% sourdough rye and this one, roasted garlic levain).

I followed the instructions from KAF for roasting heads of garlic (I needed less than half of one for the half recipe, but I made two heads and dumped the rest of the cloves in a baggie with some olive oil and stuck it in the freezer).

I mixed all the ingredients in my stand mixer (bread flour, whole wheat flour, olive oil, water, instant yeast, salt, garlic, and the levain). I let the bread rise for two hours with a fold in the middle. I shaped the loaf into a long oval and then life got in the way. I ended up changing our dinner plans and the loaf went into the fridge for 24 hours. The loaf exploded in the fridge. I was nervous about slashing it, but decided to risk it, and sure enough it started deflating immediately. Happily, it recovered somewhat in the oven.

We ate the bread with our favorite chicken-veggie-noodle soup. My little guy who usually only likes white breads of the ciabatta/French bread/dinner roll variety actually gobbled up two big pieces. Hubby loved it (no surprise there). The garlic flavor was consistent but not overpowering, and it paired especially nicely with the soup. 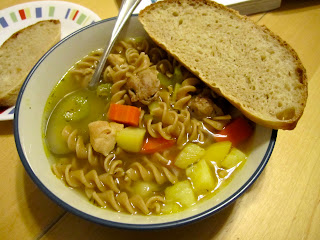