What to get for the lady who has everything 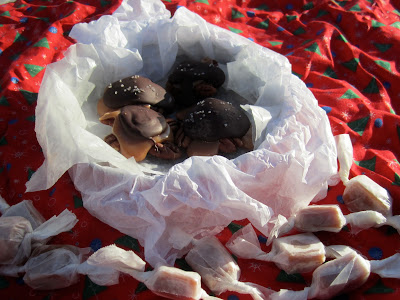 My stepmom is one of those people who is impossible to shop for. She spent many years as an independent career woman, and when she wants something, she gets it for herself. Christmas becomes something of a trial then, because she can't think of anything that she wants.....usually, I end up buying her some jammies.

This year, though, just before Christmas, KAF posted this blog post about Pecan and Salted Caramel Candies, and I was inspired. My stepmom loves turtles...whenever we're looking for a special little thank you candy treat, I always pick her up a little box. What about homemade turtles?!

Part of the fun for me is making things as homemade as possible, so while I used the KAF post for inspiration, I didn't really want to settle for using store-bought blocks of caramel or wafers of chocolate.

I've made caramel sauce before, but never caramel candies. After some research, I finally settled on this recipe from David Lebovitz for salted butter caramels. I followed his recipe exactly, except that I'd calibrated by thermometers just before and adjusted the temperatures accordingly. (I say thermometers because, while I have a candy thermometer, I don't really trust it...so I use it to give me an approximate sense of where we are and then pull out my thermapen for exact readings as I get close.)

I found this recipe by Emeril for homemade turtles, so while I used a different recipe for the caramel, I used Emeril's for technique. I toasted pecans for 10 minutes in a 350º oven, stirring half-way through. Then I arranged them (I couldn't quite achieve Emeril's star-shaped pattern) into eight piles on a buttered jelly roll pan.

I poured the caramel into a loaf pan (an 8" instead of a 9") and let it cool for about 10 minutes. Then I used an oiled tablespoon to pour a tablespoon of caramel over each pecan stack. The caramel definitely stayed in place better after the 10 minute rest (the caramel I tried to pour immediately just ran all over).

While the caramel was hardening, I cut up a 4 ounce bar of chocolate (60%) and melted it. Once it had cooled to 80º, I used a spoon to pour it over the turtles. (I skipped the shortening that Emeril called for.) Not knowing how she'd feel about salted caramels, I sprinkled sea salt over half of the turtles and left the other half plain.

Because I only made eight, hubby and I didn't actually get to try any of the turtles. But, and I am not normally a caramel person, the buttered salted caramels were amazing...especially sprinkled with a little sea salt and dipped into some of the leftover chocolate! 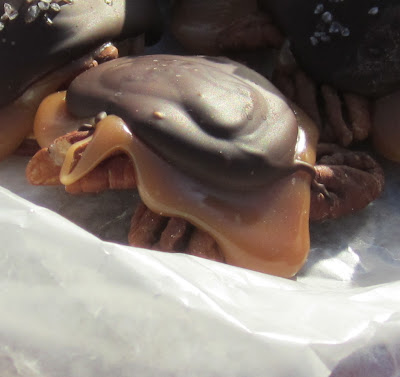