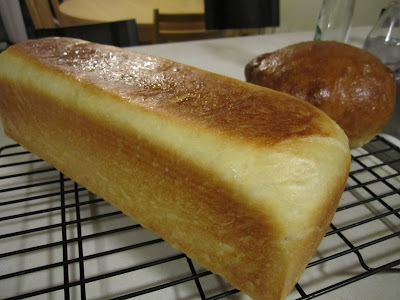 After receiving a nifty pullman pan for Christmas, I was so excited to see pain de mie on the January list for Mellow Bakers...and now here we are in February, and toast bread shows up: another pullman pan bread!

I'd never heard of toast bread, but apparently it's an English bread and is similar to last month's pain de mie. From what I noticed, they are different in that the toast bread has no powdered milk, less butter, and the addition of malt powder.

This was the most stressful bread I've made in a long time! Actually, it was a very easy recipe, but the batteries in my scale went out just as I was in the middle of pouring in the flour. Grrrrr. Luckily, I was able to jiggle the batteries a bit and get them to weigh the flour after a bit. But then I had to add all of the other ingredients by measuring instead of weighing.

The bread included bread flour, high gluten flour (which I didn't have, so I just added some vital wheat gluten to my bread flour), instant yeast, unsalted butter, water, salt, and malt powder. It's all mixed together and folded once during it's first proof. Then into the tin and then into the oven.

I still didn't get the perfect pullman corners. As with the pain de mie, I used 2 1/2 pounds of dough, but this time I let it rise a lot longer...probably an extra hour. The dough was a little under an inch from the top when I put it in. I guess next time I'll try a bit more dough and a longer proofing time.

I think I prefer last month's recipe, but I still really enjoyed this bread. We'll use it for grilled cheese sandwiches and eggs in a nest this week. And it made wonderful pb&j for a quick lunch this afternoon!

UPDATE: Hubby said that this bread made the absolute best grilled cheese sandwich he'd ever had in his life.
Posted by Abby at 7:00 AM