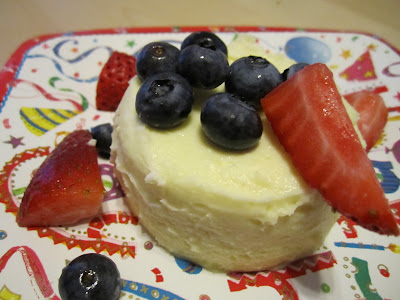 My in-laws were on their way to town and were planning to be here for my mother-in-law's birthday. I offered to make her any dessert treat she wanted. After discussing several possibilities, she decided on cheesecake.

I was excited but nervous...I've never made cheesecake before! I wanted a great recipe (of course), so I began to do some research. A friend of my dad's is known for her cheesecake, so I started with her recipe. It called for shortening, which I never use and don't keep in the house. I was nervous about substituting butter when I had no experience with either her recipe or cheesecake in general.

I cried out for help on Twitter and both Phyl and Di sent me links to their favorite recipes, both of which looked awesome.

And then I thought about the kiddos...I began to worry that they wouldn't like cheesecake. They look forward to birthday celebrations so much, and I didn't want them to be disappointed by the lack of traditional cake and ice cream.

Andrea had recommended Nick Malgieri's individual cheesecakes from Modern Baker, which had the advantages of being small enough for just one serving per adult and taking care of one of my challenge recipes! Oh, and a third advantage: I actually had all of the ingredients in the house. I decided to make these individual cakes and a batch of cupcakes for the kiddos.

I made a half-batch, which should've been 4 1/2 individual cheesecakes. But my ramekins are a little bigger than the ones NM calls for, so I just made 4 slightly bigger cheesecakes.

The recipe was really easy. The only difficulty was baking them...the recipe says 25-30 minutes, until they are set on top. I baked mine for 40 and still wasn't convinced they were done. They cooled in the fridge over night. Like Andrea, I had some trouble getting them out of the ramekins neatly. But after the first fail, the other three came out okay.

The verdict? My in-laws and husband raved...my mother-in-law said she could eat this cheesecake every night for a month. And then...my always proper mother-in-law licked. her. plate. clean. Yes, I will make these again!
Posted by Abby at 8:56 PM