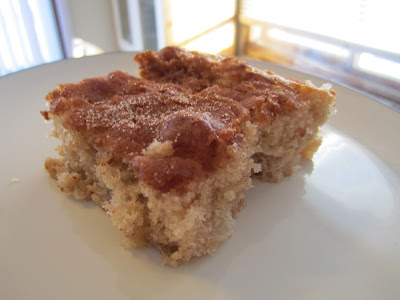 Our February Twitter avatar chef was chosen by Nancy: James Beard. I really wanted to make one of his yeasted breads (and maybe I still will this month). Before I'd started baking, I'd never heard of James Beard, but once I started baking bread a couple of years ago...well, you can't read about bread for very long without reading about Beard on Bread.

But I'd already made a couple of loaves of toast bread (one of Mellow Bakers' February breads), and I've been working on a multi-stage rye, and the sweet recipes on the Beard foundation site just looked so good. And then I started thinking about how long it'd been since I'd baked anything for hubby to take in to work (or for me to take to work, for that matter).

And then I saw this snickerdoodle cake recipe. Snickerdoodle coffee cake?? I love snickerdoodle cookies. And my awesome hubby had bought me some Vietnamese cinnamon from KAF for Christmas. I just couldn't get this recipe out of my mind...so I made it!

This was so incredibly easy to make, but it seemed like such a tiny amount of batter for a 9x13 pan. Nevertheless, I got one prepared. When I scraped the batter into the pan, I again thought, "This can't be right," so I started googling to see what I could see. I found this post, in which the author claims that there's a misprint in the original cookbook, and the recipe is actually meant for an 8x8 pan. That made me feel much better. And then I read that she added two pears and some vanilla to her recipe...which sounded really yummy.

So I scraped all of the batter back into the bowl, quickly cut up a pear and mixed it in, and moved it to the 8x8 pan. (Note: In the recipe I found, she says you should use two very ripe pears. All I had was an underripe pear, but it worked perfectly in the cake. I'd be worried that a very ripe pear would just turn to mush. Instead, we had lovely chunks of soft, sweet pear in our cake.)

It was done in 25 minutes, and almost completely gone a couple of hours later. So I'm off to make a new pan of snickerdoodle pear cake for hubby to take to work tomorrow! ;-)

1. Sift the sugar, flour, salt, baking powder, and cinnamon into a large bowl.
2. Whisk the egg and milk together.
3. Mix the wet ingredients in with the dry.
4. Add melted butter and whisk until combined.
5. Stir in pear chunks.
5. Pour into a buttered 8x8 pan.
6. Combine topping and sprinkle some (most?) over the cake.
7. Bake in a 400 F oven for 25 minutes. 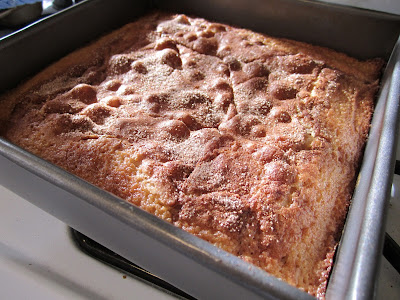