30 minute pasta: Fusilli with sausage and zucchini (with bonus for dessert) 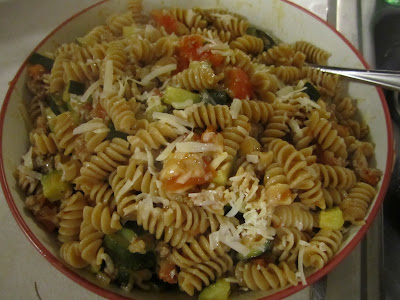 This one took 46 minutes from walking into the kitchen to sitting down at the table. Part of that was because I elected to go with Guilliano Hazan's homemade sausage, and I hadn't made it ahead of time. (Actually, it was supposed to be made a day ahead and refrigerated for the flavors to meld, but we thought it tasted great, even made at the last minute.)

That's not the whole reason for the extra time, though, as the sausage only took a few minutes to throw together. It was easy-peasy: ground pork, garlic, salt, pepper, and dry white wine.

I'm actually not sure how this recipe could fit into thirty minutes, as there are several steps where things have to cook for 10 or more minutes. But it was still easy and totally worth it; I really loved this one! The sauce was made with onion, butter, sausage, zucchini, salt, and fresh tomatoes. Then it was tossed with the pasta and some freshly grated parm.

While it was cooking, I had the thought that mushrooms would be good, too, but because these recipes are so simple, I feel like I need to make them as written the first time to see what they're supposed to be. I will make this one again, definitely with mushrooms next time.

****
After eating dinner and putting the kids to bed, hubby and I were craving something special for dessert. I'd been drooling over the recipe for Chocolate Cake Heart's Desire which Joanna posted (from the River Cottage Everyday cookbook) ever since she first posted, but we haven't had fancy chocolate in the house for ages! Luckily, we'd just been to the store and I'd remembered to pick up some Lindt 70%, so I was finally able to make this cake. I halved the recipe, and it provided us with a delicious dessert for two nights (with ice cream, of course). Yum! 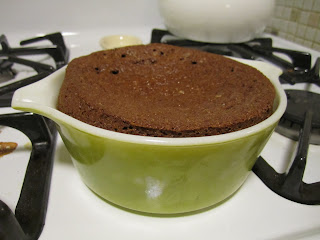