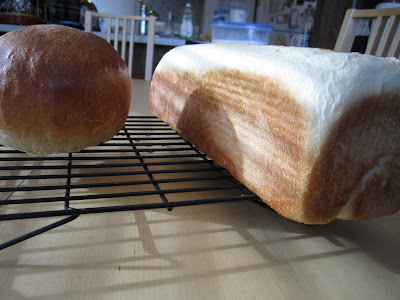 I was spoiled at Christmas this year with new and fun cooking and baking gifts. My favorite one? My hubby ordered from King Arthur Flour! What did he get me? I didn't even really care . . . it just meant so much that he a) knew how much I wanted to order from KAF and b) did it all by himself without asking me anything about it!

I've filled a shopping cart more times than I can count, but never could commit to actually submitting an order (in addition to not being very mellow, I'm also pretty frugal . . . my mom would say "cheapskate"). I was so excited to open a stocking stuffer and find the KA Vietnamese cinnamon that I've been coveting. And under the tree? A pullman pan! My hubby knew I'd been considering a pullman pan when I made the Horst Bandel Pumpernickel, but I ended up just baking it in my dutch oven.

Anyway, imagine my excitement when the January Mellow Baker breads were posted and pain de mie, aka pullman bread, was on the list! Of course I had to bake it immediately.

This is probably the easiest bread I've baked from Bread so far. I started mixing it at about 8:00 this morning, and we were snacking on it by 1:00.

The dough consists of bread flour, unsalted butter, salt, instant yeast, powdered milk, and water, all mixed and kneaded. My scale (grrrr!) got me again and errored right in the middle of pouring water, so I just guessed how much to add. During mixing, there was flour at the bottom of the bowl, so I added more water. My KA was still working hard, and after the kneading time, I realized that I probably should've added even a bit more water as the dough still seemed rather dry. Next time, I'll do an official mise en place and weigh my water ahead of time!

The dough proofs, is folded, proofs again, formed into loaves, placed in the pan, rises a final time, and goes into a 400F oven. The dough is supposed to be 1/2 inch from the top of the pan when it goes in; mine wasn't close, but it definitely seemed proofed and I didn't want to overproof it, so I put it into the oven. It rose considerably in the oven and touched the top of the pan, although I didn't get those nice square corners that pullman loaves are famous for.

No matter, it was still tasty and we snacked on the little loaf all afternoon. I brushed it with melted butter when it came out of the oven, which we really enjoyed. I wasn't sure if that was a good move with the pullman loaf, so I didn't try it. Maybe next time. I also think I'll add some white whole wheat flour next time to improve the whole grain content of the bread . . . but there will definitely be a next time, and I'm even more excited that hubby got me that pan! 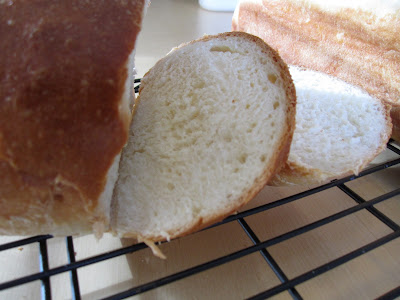