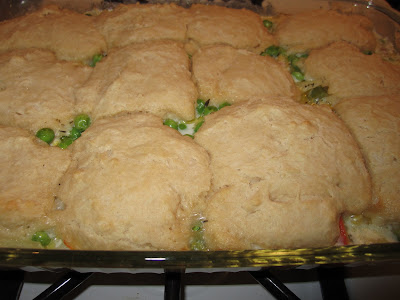 We had a lazy New Year's day ~ a sick little girl and freezing temperatures made going outside seem entirely unnecessary. Inspired by several people tweeting about a Modern Baker savory tart, I decided to browse through the next section of the book.

I have a big sweet tooth, but I'm excited to be entering a savory section of the cookbook ~ especially one filled with so many egg-based tarts; I really enjoy quiche-y dishes.

I didn't have the ingredients on hand for the corn tart that others were baking, but I did have the ingredients for the chicken pot pie, so I decided to make it for dinner. The stock uses chicken thighs, water, thyme, salt, and a bay leaf, and then carrots and onions later on. For the pie, you layer the chicken and veggies, followed by frozen veggie, and then the stock which has been mixed with cream and reduced. Finally, you make biscuits which get plopped onto the top, and the whole thing bakes for 25 minutes.

The broth was yummy and the chicken and veggies both had a great flavor. Unfortunately, the biscuits never really browned, even though I left the pie in the oven for additional time; and when we cut into them, they were undercooked in the middle. I was also surprised by how liquidy the pie was; we had to use a slotted spoon to extract all of the meat and vegetables.

So I probably won't make this one again. I have a stand-by pot pie recipe, which I make once every couple of weeks and which we love. While it does take a bit more work with chopping and sauteeing, it really doesn't take any additional time. On to the next recipe!
Posted by Abby at 8:34 PM