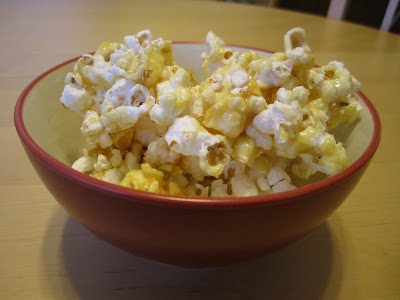 Several of the people who I know from various baking challenges started changing their Twitter avatars each month around a certain theme. Kayte (Grandma's Kitchen Table) invited me to participate in the avatar baking for 2011. Each month, one of us chooses a chef. The rest of us cook or bake one of that chef's recipes and change our twitter avatar accordingly. I'm so excited to participate! I think there are only a couple chefs from whom I've cooked before, so I can't wait to be introduced to new chefs, new recipes, and new cookbooks!

Anyway, Kayte's pick for January was Thomas Keller. I had never heard of him, but it seems that many people received his cookbook Ad Hoc for Christmas. I searched online and found a bunch of recipes that sounded really amazing. I'm especially excited to try his oh-so-simple recipe for roast chicken later this month!

But it was something like 4F outside yesterday, and I didn't want to leave the house to buy any ingredients, so I picked a simple recipe for which I had all of the ingredients on hand: caramel corn! 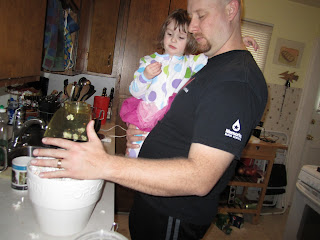 my assistants, popping the popcorn
The recipe calls for 1 cup of unpopped popcorn, but I didn't feel like there was enough caramel for all of that, so I ended up making a double batch of the caramel. The first batch was awesome! So tasty, in fact, that hubby, baby girl, and I ate almost the entire batch while I was making the second batch of caramel. The second batch of caramel didn't turn out (totally my fault; I didn't cook the caramel long enough), so it tasted more like corn drizzled with sugar syrup . . . never fear, we ate it anyway!

1. Place the sugar, corn syrup, and water in a large saucepan (I used my dutch oven) and heat over medium-high heat. Stir constantly for a couple of minutes until the sugars have disolved and the mixture begins to boil.
2. Let mixture boil (without stirring) for five minutes or until the caramel turns a light golden brown.
3. Add baking soda and butter to the caramel and stir until the butter is melted.
4. Coat the popcorn with the caramel. (This process was challenging for me. The original instructions tell you to dump the popcorn into the pan and stir to coat, but I found it challenging to get everything evenly coated. The second time, I tried dumping the popcorn onto parchment-lined baking sheets and drizzling the caramel over them, but that didn't work very well either.)
5. Set aside to cool. (Ha ha. Ours was eaten long before it was cool!)

Happy New Year, everyone! Can't wait to see what delicious things are baked in 2011!
Posted by Abby at 8:25 PM