I started the Modern Baker Challenge feeling unconvinced that I would make many of the quick breads in Nick Malgieri's The Modern Baker, and now I've planned my meals two nights in a row around trying one of his recipes.

Saturday night, I was craving scones, so I decided we'd have breakfast for dinner (we had eggs-in-a-nest).

Last night, I really wanted to try the pecorino and pepper biscuits, which I've been drooling over on Phyl and Andrea's sites, so I decided to make a pot roast.

This was a very easy recipe; once again, my new food processor came in handy. I processed the butter and finely grated cheese (I didn't have pecorino, so used his substitution suggestion of paremesan, which we always have in the house). Then I added in the flour, salt, coarsely ground pepper, and baking powder. Finally, I added in the milk.

When I dumped the mixture onto my counter, it was very crumbly, so I took NM's advice and dribbled on some more milk until I could pat the dough into a rectangle. I finally used my new biscuit cutters, which my husband bought for me over a year ago (!) but which I'd never used. The dough made exactly twelve biscuits.

I baked them for 20 minutes, and then we sat down to dinner.

These were okay. As with the grissini (from the Mellow Bakers Challenge), we weren't hugely fond of the cheese flavor in the bread. And I was actually a little short on cheese, so I'd used a half ounce less than he called for. Soaked in the broth from the meat, however, hubby and I both enjoyed them more. The kiddos were not fans.

I do think I'll try this recipe again, but next time I'll try the old-fashioned baking powder biscuit variation. 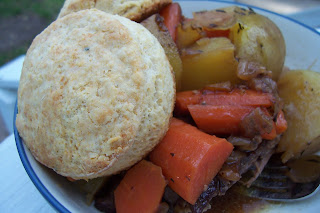