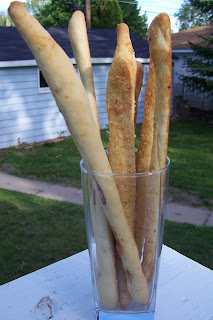 So I just had to get that Tuscan bread off the top of my page. Looking at the Mellow Bakers' breads for May, I noticed that grissini seemed to be a fairly quick one.

Indeed! At 3:20, I mixed the ingredients (bread flour, yeast, salt, olive oil, softened unsalted butter, and water) and kneaded them in my stand mixer for five minutes. The dough was beautiful: silky, smooth, not sticky at all.

When I first read the description of grissini (p 256 in Hamelman's Bread), I planned to try both the roasted garlic version and the cheese and pepper version. Unfortunately, making these tonight was a spur of the moment decision and I didn't have any garlic roasted (except for a tiny bit of frozen and I was worried about what it would do to the temperature of my dough); you're supposed to add it to the ingredients at the beginning. So I proceeded with the dough, and I roasted some garlic while the dough was fermenting, using the speedy method detailed on the King Arthur website.

I put the dough into a cup to ferment for an hour. It didn't move. Luckily, I had read Steve's experiences and remembered him saying that his never moved either, but that the breadsticks turned out fine.

Then I divided the dough into 1 1/3 ounce portions and let them rest. And then I realized that, since I was in the middle of cooking dinner, I probably should've just rolled them and cut them with my pizza cutter. But they were already in pieces, so I rolled each one out by hand; actually, it went pretty quickly. I experimented with four toppings:

Verdict: Easy peasy recipe! Started at 3:20 and by 5:30, we were sitting down to spaghetti and homemade breadsticks. These were very tasty! Even my non-bread-eater little guy liked them. I'm excited to experiment with other variations. Hubby and I both prefered the plain garlic ones the best. The cheese and garlic combos were our second favorite and then the cheese-only. I didn't like the ones with salt and sesame seeds. I think next time I will make them with the garlic incorporated in the batter, although I may use more than Hamelman calls for . . . I roasted an entire head of garlic and it was only enough for about a dozen breadsticks, and even in those, the garlic flavor wasn't very strong. But I'm really excited to add such a quick and tasty recipe to my repertoire!
Posted by Abby at 7:43 PM