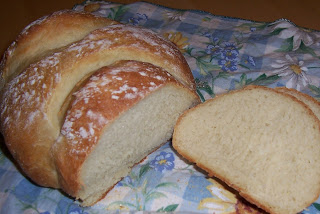 Hubby says that we've all given Tuscan bread a bum rap because, unlike the rest of the breads in the Bread Baker's Apprentice, this bread is not meant to stand out on its own, but is just a vehicle for other flavors.

Nonetheless, I still was so startled by the flavor of this bread that I spit out my first bite. (Then I ate it, of course.) But the bland, slightly sweet, almost non-flavor really caught me off-guard.

This recipe started out strangely by pouring boiling water over flour, stirring it into a paste, and leaving it to sit on my counter for a day.

The rest of the process was pretty standard, except that my dough kept the paste-like consistency for quite a long time. Well, and when you add more flour, yeast, olive oil, and water, you don't add salt; that was weird. And (maybe because I wasn't excited about this one based on the reviews its gotten?) I didn't seem to have enough patience to let the dough do what it needed to do; instead, I added too much water, then had to add more flour, then more, then more. Finally it achieved a normal, non-play-doh-like texture and I was able to proceed with the recipe.

The dough doubled in exactly two hours. I shaped it into a boule and let it rise for another hour. Sprinkled it with flour and slashed it. Baked it with a steam pan filled with water and a few water spritzes. After twenty minutes, it was exactly 200F internally.

Hubby and I tried this one by itself ~ very plain, although it had a really soft, almost Wonderbread-like texture. We tried it with salted butter ~ I couldn't believe how clearly I could taste the salt in the butter. We tried it with honey and butter ~ the honey really dominated. Hubby tried it sprinkled with salt.

Today, I've got an artichoke dip on the menu; maybe Tuscan bread will be a good vehicle for that.

UPDATE: Didn't end up making the dip. We needed bread for sandwiches, so we used up most of the Tuscan for PB&J and PB&B. Seemed to resemble good ol' PB&J on Wonderbread . . . however, I have never been a white bread fan and I really didn't enjoy it. Still, hubby and the kids seemed to enjoy their sandwiches, the loaf is almost gone, and we will not be making it again. On to bigger and better loaves!
Posted by Abby at 6:52 AM