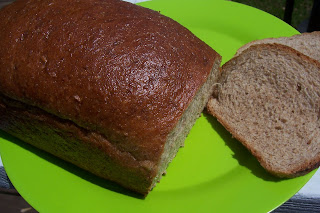 I was so excited when I saw that there was a whole wheat bread at the end of The Bread Baker's Apprentice Challenge. 100% whole wheat is our sandwich bread of choice around here, and although the light wheat bread and the multi-grain extraordinaire were both good sandwich breads, I was hoping to find one that was more similar to what we usually eat . . . especially for the little guy, who will not eat any bread that I bake. He will only eat one specific brand's 100% whole wheat bread. That's it. Try to sneak in another kind, even one that looks the same, and he will take one bite and then say, "This isn't my favorite bread! I don't like this bread!"

But as people started completing the Challenge, I read nothing but horror stories about this bread. Sally from Bewitching Kitchen said that it competed with 100% sourdough rye for last place in the Challenge. Oggi from I Can Do That called it a "total fail." Phyl at Of Cabbages & King Cakes called it "meh" and didn't even bother to take a picture of the final loaf. Sadness.

Because of the consistent bad reviews, I took a few more liberties with this recipe than I normally do. The first change I made was to make half a recipe, not wanting to have two loaves of bread that were only good enough for ducks.

Last night, I made a soaker; Peter Reinhart calls for coarse whole-wheat flour or other coarsely ground whole grains. I decided to use a 5-grain cereal I had in the cupboard, which has wheat, rye, oats, barley, and flax. I soaked the cereal in water and left it overnight.

At the same time, I prepared a whole-wheat poolish, using some high-protein whole wheat flour, instant yeast, water, and a little kick of vital wheat gluten. Instead of refrigerating it overnight, I simply left it on the counter.

This morning, I mixed the soaker, the poolish, more whole wheat flour, a bit more vital wheat gluten, salt, instant yeast, honey, and the optional egg and vegetable oil. The dough came together easily. After about five minutes of kneading in my stand mixer, it was a little tacky and felt perfect.

It doubled in about an hour and a half, so I formed it into a sandwich loaf and stuck it in my 8x4 loaf pan. It again rose faster than expected (about an hour), and I put it into the oven.

Hubby pulled it out of the oven at exactly 45 minutes, and the internal temperature was already above 200 F, so it probably could've come out five minutes earlier. Then he brushed it with butter.

The verdict? Not outstanding, for sure, and not even close to one of the best breads I've made so far . . . but it's not even close to the worst either. It's definitely comparable to the store-bought stuff and pretty tasty with a smear of butter. We'll see if the little guy will eat it! If so, I can see making it again. If not, I'll put it in the maybe column and stick to Mags' oatmeal bread for the hubby and me.

UPDATE: Well, the little guy happily ate half of his sandwich. Did he not eat the other half because he wasn't hungry anymore or because he figured out that this wasn't truly his bagged stuff from the grocery store? I guess I'll have to make it again to find out because the rest of the loaf disappeared at dinner last night.
Posted by Abby at 1:28 PM