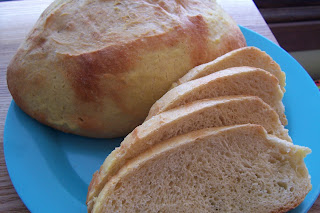 I can't believe I'm on the 39th bread in the Bread Baker's Challenge! Only four left: two sandwich breads and two specialty breads that have both gotten rave reviews.

Number 39 brings us to Vienna bread; Peter Reinhart explains that "most of the great French breads tht we love today . . . came to France a couple hundred years ago via the Austro-Hungarian empire." The difference between this Vienna bread and French and Italian is that Vienna bread includes some enrichments.

A big highlight for me is that I used baker's math for the first time! This recipe calls for 13 ounces of pâte fermentée, while the recipe makes 16 to 17 ounces. Instead of throwing some away, I just adjusted the recipe, calculating that I needed 7.75 oz of flour rather than the 10 called for in the original recipe. Then I adjusted everything else accordingly using the percentages in the book. Success!

I mixed bread flour with salt, sugar, yeast, barley malt syrup, butter, egg, water, and the pâte fermentée. I kneaded the dough in my stand mixer for six minutes. The dough seemed buttery, like brioche dough, even though there was only a tablespoon of butter. It just didn't seem to have the right gluten development and it seemed almost sticky, but it was time to sit down for dinner. I scraped/poured the dough into my prepared measuring cup, and then gave it a stretch-and-fold after a while and another one ten minutes after that. What the stretch-and-fold can accomplish just amazes me!

Meanwhile, I made the Dutch crunch topping. Peter Reinhart explains that rice flour or cream of rice cereal are the perfect base for this topping, but I didn't have either, so I used semolina. Based on advice of those who have gone before me, I cut the recipe by thirds. I mixed semolina, bread flour, yeast, sugar, salt, vegetable oil, and water, and made a paste.

After the loaves had risen again and the oven was preheated, I had two more items of business before baking: scoring the loaves and painting on the Dutch crunch. I just didn't know which one to do first. I went back and forth and finally re-read the instructions that "the paste is brushed on the dough . . . just before the bread goes into the oven," so I decided to score them first.

Big mistake. As I'm sure more experienced bread bakers will predict, while I was painting on the topping, the loaves started to collapse and spread outward. By the time I took my fake-steam-oven aluminum pan off of the loaves after the first ten minutes of baking, the loaves were low and squat with zero evidence of scoring. I was so bummed.

But while the look of the bread was disappointing, the bread itself was not. We could definitely tell that this bread is related to French and Italian breads, but the presence of the enrichments was clear as well. It has a very similar flavor to baguette, but with a texture that makes it well-suited to making a sandwich.

And that's exactly what we're using it for: Picnic sandwiches for our Mothers' Day trip to the zoo . . . Happy Mothers' Day, everyone!
Posted by Abby at 7:51 AM