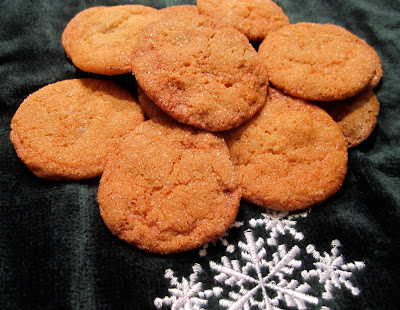 Several of my Twitter pals were baking together from The Modern Baker this past weekend. I really wanted to join in and make the three-way gingersnaps, but a debate tournament and a family trip to the science museum ate up my weekend and left me with no time for baking.

But those gingersnaps were calling my name, so last night, I quickly whipped up a half-batch. These are called three-way gingersnaps because they're made with three different forms of ginger: ground ginger, fresh ginger root, and chopped crystallized ginger. (I didn't find fresh ginger root when we were grocery shopping this weekend, so I used bottled minced ginger from the fridge.)

The gingersnaps also have honey instead of the traditional molasses, so they were a little lighter in color.

These were absolutely delicious. In fact, the half-batch (about 3 1/2 trays of cookies) is just about gone. My dad, who loves gingersnaps, said they may have been the best he's ever eaten. I am positive we'll be making these again...maybe even within the week! :)
Posted by Abby at 7:44 PM