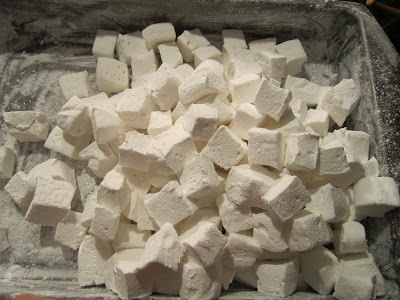 Homemade marshmallows have been on my to-do list for a long time. I've bookmarked several recipes: one from Deb at Smitten Kitchen, one from David Leibovitz, one from Alton Brown, and most recently, one from King Arthur Flour. Whenever I'm bored, I start reading the recipes and all of the comments and think, "I really have to try these soon!" And then I get too overwhelmed at the prospect of all that mess.

The AB and KAF ones simply use sugar, corn syrup, salt, cold water, and gelatine. The ones Deb and DL posted both use egg whites. All four have pretty terrific reviews. In the interest of ease (and because I was inspired to start the process when it was nearly bedtime), I decided to go the non-egg white route, although I ended up bouncing back and forth between the four sites, using tidbits of advice from each. I started the process at about 8:30 and the marshmallows were ready to dry in their pan by 9:15, so really, it was easier than I expected.

I started by pouring cold water over gelatine in my stand mixer bowl. Then I boiled sugar, corn syrup, salt, and water until the sugar dissolved, and left it to boil untouched until it reached 238º on my instant thermometer (I actually tested my thermometer for the first time, and learned that my water boils at 210º).

Then I started my mixer on low and slowly slowly slowly drizzled the hot sugar down the side of the bowl. I increased the mixer's speed to 8 and mixed until the marshmallow was lukewarm (about 8 minutes). Thanks to Deb's warning not to touch anything! I resisted the urge to scrape the bowl and, I believe, saved myself the headache of the marshmallows sticking to everything in sight.

Finally, I used an oil-coated rubber spatula to spread it into my prepared pan, a 9x13 pan coated with a little coconut oil and then dusted with a confectioner's sugar/cornstarch mixture. I sifted some more sugar/cornstarch over the top and left the pan to sit overnight.

Today, I pulled the marshmallow slab out of the pan and put it onto a cutting board, and then used oil-coated scissors to cut it into pieces. I tried using a mini-cookie cutter to make fun shapes, but it was way too sticky. So the kids each made heart-shaped marshmallow and then I went back to cutting with the scissors. After cutting, I threw the cubes into a bowl of confectioner's sugar, stirred them to coat, and then set them in a strainer to shake off the excess sugar.

I can't believe I waited so long! These were a huge hit with the kiddos and the hubby; I'm not a huge marshmallow fan like they are, but even I couldn't resist grabbing a fluffy bite every time I walked past the pan. Next up, the egg white version! 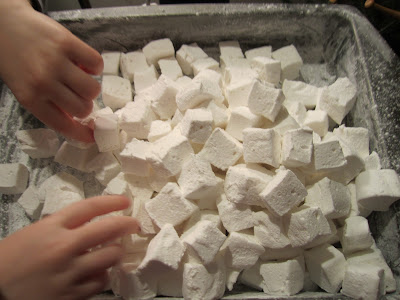