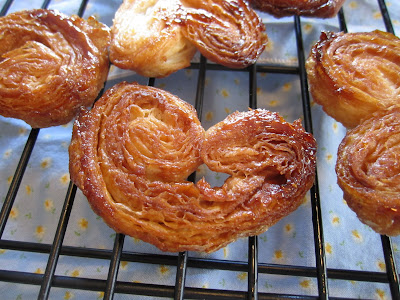 Not only have I never made puff pastry before, but I've never even cooked with it. Whenever I see it in a recipe, I get annoyed that they want me to use store-bought when I could just make my own...but then I've never made my own. It's a vicious cycle.

And I knew that it was a little intimidating...something about rolling butter and flour 500 times, keeping everything cold, if you breathe wrong, it all melts together and is ruined.

But I also knew that it was coming up in our Modern Baker Challenge. Andrea, Phyl, and Sara have already made the puff pastry and elephant ears, and seeing their results really made me want to try it.

And then Marthe picked empanadas for our next Bake! twitterbake, and they're made with puff pastry. Looks like today was the day!

I used the recipe from Bake!, although it looked pretty similar to the Modern Baker one. I mixed up flour, salt, and half a stick of sliced cold unsalted butter in my food processor. Then I switched to a bowl, where I added tiny pieces (1/4 inch) of more butter. Cutting the butter into those tiny pieces was actually the most time-consuming part! I started folding in cold water until I could push the dough together and then I began the press and fold sequence. It seemed like the instructions in Bake! are much easier than the traditional puff pastry, but a little more involved than the instructions in Modern Baker. I was a little worried about whether I was doing it correctly, but by the third turn, I felt like I had the hang of it. My dough looked like this before I put it into the fridge, and I couldn't see any of the layers I was supposed to have: 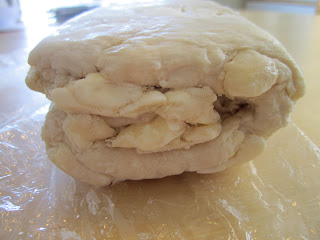 But after an hour of refrigeration, I cut off a piece to use for the elephant ears, and I saw this: 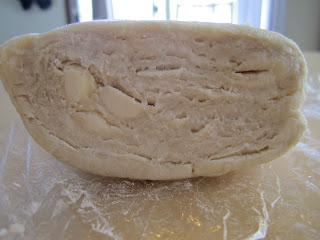 Also, while I was waiting for my dough to cool, I found a link on Nick Malgieri's website to a video of him demonstrating the puff pastry recipe from Bake! on Martha Stewart. It was so helpful!! I will definitely have it by my side the next time I make puff pastry, and I hope other beginners watch it, too.

The rest of the elephant ear preparation was easy. I rolled out the dough in sugar, folded it over on itself per the instructions, and put it back in the fridge. Then I sliced the dough into 1/2 inch segments, dipped them in sugar, and placed them on my silpat-covered jelly roll pan. The only issue was that they took way longer to bake than they were supposed to and I needed my oven for dinner...they ended up taking about 20 minutes or a little longer.

These were easy and awesome...I'm really glad I only made part of a batch because they were all gone within a couple of hours. Yum! 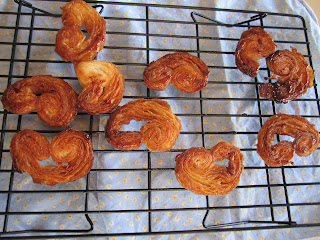