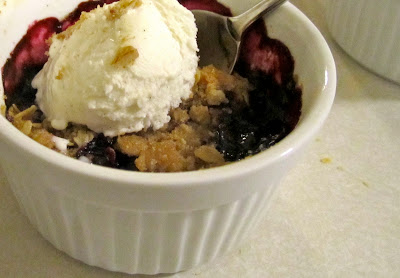 As the kids and I walked into the grocery store a couple of days ago, we were greeted by a store employee handing out little sample cups full of fresh blueberries. We couldn't resist. And even though they're not local, which makes me feel a little bit guilty, I couldn't resist buying a tub either. Sometimes in the midst of the longest winter EVER, you just need a break from apples and pears and other winter fruit.

Last night, I wanted to do something fun with the leftovers of the giant tub we'd purchased. I found this recipe for blueberry crisp from Cooking Light and was happy to see I had all of the ingredients on hand.

I didn't want to make a giant batch (the recipe makes an 11x17 baking dish) and we didn't have that many blueberries left, so I decided to make individual crisps instead.

1. Preheat oven to 375F. Butter ramekins (I used three 7-ounce ramekins).
2. Toss washed blueberries with first three ingredients (brown sugar, flour, lemon juice).
3. Combine flour, brown sugar, oats, and cinnamon. Mix in butter pieces until mixture resembles coarse meal (with pastry blender or food processor or, because it's such a small amount, I actually just used my fingers to crumble it all).
4. Divide blueberries equally between the ramekins. Sprinkle the topping over the blueberries.
5. Bake in a 375F oven for 25 - 30 minutes until topping looks golden and yummy and blueberries are bubbling.

The verdict? As predicted, the baby girl (who doesn't like blueberries) didn't like it. Surprisingly, the little guy (who LOVES blueberries and all things fruit) didn't like it, either. But the hubby and I were not sad that the kids didn't eat theirs. We happily stole bites from their plates during dinner, and saved our own ramekins for after the kids went to bed...when we added a scoop of ice cream, of course. I will definitely make this recipe again!
Posted by Abby at 1:13 PM