Summer on a plate 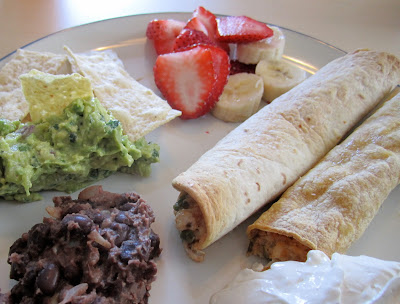 I'm most of the way through my SPRING break today, and guess what my family spent the afternoon doing? Yes, shoveling. AGAIN. This longest, coldest, snowiest winter is taking its toll...kids have cabin fever, adults are crabby, roads are cracking, vehicles are groaning.

So I declared war on winter with our dinner tonight...in fact, I skipped spring and went right to summer!

Strawberries! Chips and guac! These awesome taquitos that Tracey posted, interestingly, the day after my hubby bought a bag of frozen ones because he'd been craving them for weeks. Seasoned black beans.

The taquitos were a huge hit. Hubby was in seventh heaven, declaring them way better than the frozen variety he's been craving. And both kids loved them, which shocked me. I made both corn and flour varieties, figuring that hubby would like the corn (more traditional) and the kids and I would prefer the flour (what we usually eat). Interestingly, the little guy and I both preferred the corn tortilla ones. Hubby and the little girl liked both equally. I made a huge batch of filling, which made about a dozen taquitos for dinner (we had a couple left over) and another dozen and a half to freeze.

Coarsely mash the avocados in a medium bowl (you still want to see some chunks). Add the next five ingredients (through salt). Squeeze the juice of the lime onto the guac. Stir to combine. (It's best the day it's made, but will keep for an afternoon or a day; just press a layer of plastic wrap onto the top, refrigerate, and give it a stir before you serve it.)

2. In a large bowl, stir together all ingredients except tortillas. (I actually used my hands and mixed it like a meatloaf.)

3. (If using corn tortillas, warm them a couple at a time in the microwave, under a damp paper towel; mine took 22 seconds.) Spoon 3 tablespoons of filling onto tortilla and roll as tightly as you can. Place seam-side down on the pan.

4. Spray the taquitos with cooking spray and sprinkle with kosher salt. Bake for 20-25 minutes, until crisp and golden (ours took about 25 minutes to get there).

(I baked one pan immediately. For the rest, I made the tortillas through step three, placed them on a jelly roll pan, and stuck them in the freezer for about an hour. Once frozen, I put them in a freezer bag. When we want to eat them, we pull out however many we want, place them on an oiled pan, spritz them with oil, sprinkle with salt, and bake for about 16 minutes at 425º or until the filling is just barely starting to pop out of the end.)
Posted by Abby at 7:37 PM