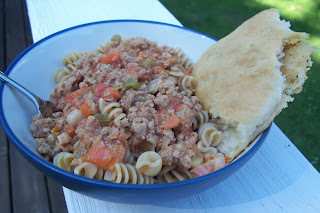 In order to create a low-stress challenge, Phyl (over at Of Cabbages & King Cakes) created the Modern Baker Challenge so that we would have three months in which to bake as many recipes out of one section of Nick Malgieri's The Modern Baker as we can/want to. We just finished the first section, Quick breads, assigned April through June. Our next section is Breads, grouped into four types (flatbreads, pan loaves, free-form loaves, and rolls) assigned July through September.

As with the quick breads, we each had a chance to choose a bread to blog about; there were a lot in this section that looked tasty (pita bread, instant sandwich bread, seven grain bread, prosciutto bread, and many more). I eventually settled on one that I'd never heard of before: fougasse (pierced French flatbread), found on page 74. Nick Malgieri writes, "a fougasse is a unique flatbread that is pierced through to the bottom in a series of slashes to increase the quantity of the crust."

Nick Malgieri gives several intriguing variations: whole-grain, bacon, rosemary, olive, cheese. The recipe makes two fougasse; I planned to make one plain and one with bacon and cheese. Unfortunately, the leftover bacon that was in the fridge wasn't good anymore, so I halved the recipe and just made one plain fougasse.

It started simply enough, with active dry yeast whisked into warm water, and then an addition of olive oil. In a separate bowl, I combined all-purpose flour and salt; then added this mix by cupfulls into the liquid. The instructions say to use a large rubber spatula to stir the flour in and beat for a few seconds until smooth. I wasn't sure if I was supposed to use my paddle attachment on my stand mixer to beat it, or the spatula, or . . .? So I just mixed it with my dough whisk, and it seemed to work just fine.

Once all of the flour was incorporated, I let the whole thing autolyse for 20 minutes. Then I dumped it onto a board, kneaded it a few times, and put it in an oiled bowl to rise. The suggested time is one to two hours. It is so hot here, even with our a/c running, that the dough had more than doubled in forty minutes; thinking back, I probably should've decreased the amount of yeast used.

I gently dumped it back onto my board and stretched it into a triangle, then folded it in thirds and transferred it onto a pan. I used a pizza wheel to cut seven slashes into the bread, let it rest for ten minutes, pulled it gently out a couple more inches, brushed it with olive oil, and then let it rise for another hour.

I baked the fougasse for twenty minutes, while reheating our favorite spaghetti sauce (a bolognese) and making some pasta. I also heated up some butter and added some frozen roasted garlic and a bit of salt and pepper.

Once the fougasse came out of the oven, I cooled it for a few minutes, then broke it in half. One half, we left plain. I cut the other part in half, and spread the garlic butter mixture on it, to make a quick garlic bread. 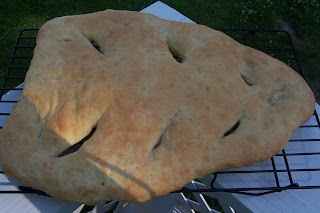 The verdict? Plain, this was a quick, tasty bread. I think it took three hours from mixing to eating. And it's convenient to have a recipe for a French-type bread that uses active dry yeast and all-purpose flour (especially if I were someone who didn't always have bread flour and instant yeast on hand). Hubby described it as tasting like a normal French bread, but with a coarser texture, much more crust and more crumbly. It was good plain, but hubby discovered the ultimate: he took the make-shift garlic bread, filled it with the bolognese, and ate it as a sandwich. Yum!
Posted by Abby at 7:54 PM