Andrea over at Family & Food is hosting this month's Bread Baking Day (BBD) #32, and she chose Italian bread for her theme.

Knowing we would be out of town for most of July, I tried to find a recipe that could also fit into one of my other Challenges. But . . . no such luck!

So instead, I thought back to one of my most challenging breads from the BBA Challenge: ciabatta. I struggled a ton with that recipe and especially the very very wet dough. I couldn't figure out the stretch and fold, couldn't get the pretty golden color, and couldn't get any holes. This was a MAJOR problem because ciabatta is one of hubby's very favorite breads. Back in the old days (before last year) when we purchased "artisan" bread from the store, he would always pick ciabatta.

At first, I was going to re-attempt the ciabatta recipe from the BBA, now that I'm more experienced with high hydration doughs. But instead, I decided to try the recipe in Artisan Breads Everyday, P. R.'s newest book.

Last night, having just walked in the door from a two+ week trip to visit my in-laws, I immediately refreshed my starter and started the ciabatta going . . . Do I have a problem?!

The recipe was easy: mix bread flour, salt, instant yeast, and chilled water in a bowl and then let sit. Drizzle olive oil over the top and then mix with the paddle attachment for one minute. Dump it into an oiled bowl, give it four stretch-and-folds over the course of an hour, and stick it in the fridge. It was a perfect recipe for a night filled with unpacking and doing laundry. And I had to laugh at my last year's self: while this was a wet dough (just like when I made it for the BBAC), it was nothing compared to the pasty goo I dealt with when I made the Mellow Bakers' 70% rye earlier this month!

P.R. says the ciabatta dough should be at least 1 1/2 times its original size after its overnight rest. When I pulled it from the fridge this morning, it had easily doubled, and when I got home after 1 1/2 hours of errands (I was only supposed to let it sit for an hour), I saw this: 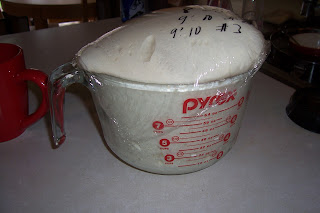 Eek!
I used P.R.'s suggested variation of mixing a little whole wheat flour in with the bread flour for dusting. Then I carefully dumped the dough onto the board, divided it in three to make three small loaves, and shaped it. Again, I can't believe how much easier it was than last time!

The only problems I encountered were that in their final rising times, the loaves grew into each other, so I had to very carefully separate them. And then when I went to put them into my preheated oven, I realized that only two loaves would fit, so the third had a bit of extra time sitting on the counter. I steamed them and then lowered the oven temperature. P.R. says to cook them for 27 - 30 minutes, but mine were over 205 F after only 15 minutes.

As for the results? I'll let the pictures speak for themselves. (Well, the pictures and the fact that hubby and the baby girl have already polished off the first loaf while I typed up this post . . . .)

Here is my first attempt at ciabatta: 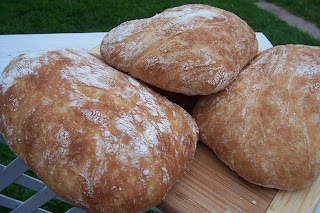 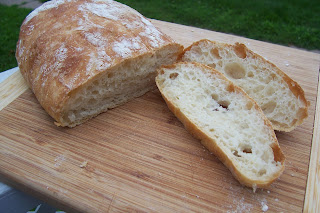