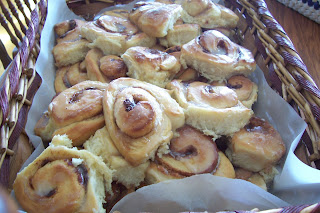 Needing to make dozens of cinnamon rolls and transport them across the country for my sister-in-law's day-after-wedding brunch, I solicited the advice of my fellow Mellow Bakers and Frieda (from Frieda loves bread). Several weeks ago, I tried a couple of different techniques for making and freezing the rolls ahead of time, and then hubby and I had a taste test and made a plan.

In my research on freezing and transporting food, I read that it's important for the food to be frozen for two days prior to transport. So last weekend, I made two double-batches of P.R.'s cinnamon rolls from the BBA and filled them with melted butter, cinnamon, and brown sugar. I purchased a bunch of disposable aluminum pans and placed 6 or 7 rolls in each one. The quadruple recipe made eleven trays (8" rounds).

Each tray was double-wrapped with plastic wrap, wrapped once with aluminum foil, and then placed into a jumbo zipper bag. We stuck the bags in the deep freeze in the basement.

The morning we were headed out of town, hubby placed the wrapped trays in our best cooler and drove immediately to a supplier of dry ice. They were very helpful, talked to hubby about our plans, assured us that 10 pounds of dry ice would be sufficient, and sold the pack to us for $10. We put the dry ice on top of the stack of trays; a few trays wouldn't fit underneath the ice, so we placed them sideways in the cooler. Then we shut the cooler tight and didn't open it for 36 hours as we drove across country.

When we arrived at my in-laws, we barely took time to say hello before opening the cooler. The trays that had been under the dry ice were still frozen completely solid. We transferred them immediately to my in-laws' deep freeze. The trays that were along side of the dry ice were slightly defrosted. We debated and debated . . . and eventually my mother-in-law convinced me to stick them into the deep freeze, too, and see what happened.

Last night, I removed the plastic bags and put the trays into the fridge. This morning, I took the rolls out of the fridge, removed the foil and one layer of plastic wrap, and let them rise on the counter for about three hours. 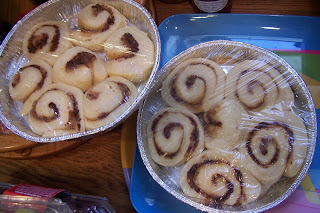 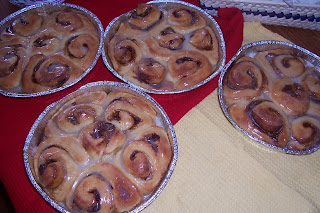 I glazed them slightly after cooling with my usual glaze (6 tbsp unsalted butter, 1/2 cup half-and-half, 1/4 tsp kosher salt, 2 tsp vanilla, and enough sifted powdered sugar to make it drizzle-able). Once the glaze was slightly hardened, I carefully separated the rolls and put them into a parchment-lined basket, just in time for the guests to arrive.

The verdict? Just about as good as fresh cinnamon rolls, these met with rave reviews. And with the exception of the worry about whether or not the whole experiment would work, it was pretty darn easy! My brand-new brother-in-law even said that they may be the best cinnamon rolls he's ever tasted! 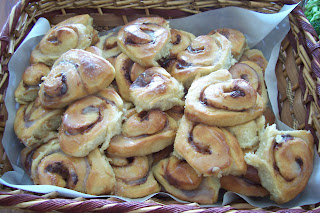 To review:
1. Follow recipe to make the cinnamon rolls up to two months in advance.
2. Fill and slice cinnamon rolls and place them into pans.
3. Wrap each pan with a double-layer of plastic wrap, a single layer of foil, and place in a zipped plastic bag. (I'm not sure all of these precautions are really necessary, but I didn't want to take any chances!)
4. Stick into the freezer until ready to use.
5. If transporting, place the wrapped pans into a cooler, and be sure that all trays stay directly under the dry ice. When planning for the dry ice, we were told we'd need 5 pounds per 24 hours of keeping the food cold. Place into freezer upon arrival.
6. Move trays from freezer into fridge the day before you plan to bake.
7. Allow trays to sit out at room temperature for 3-4 hours before baking.
8. Bake, glaze, and enjoy as usual!
Posted by Abby at 6:22 PM